[Portrait in Wax] (Table of Contents)

Cover title taken from first interior story from which the cover is based. 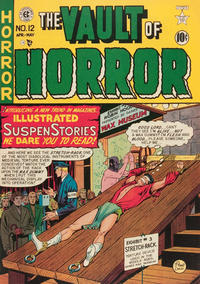 Portrait in Wax! (Table of Contents: 2)

Genre
horror-suspense
Characters
The Vault Keeper (host); Robert [aka Jules Vendette] (artist, death); unnamed art buyer; Lord James Cherringwood; Henry (villain, Robert's friend, death)
Synopsis
Henry was jealous of his artist friend Robert for not selling his etchings. One day Henry began selling Robert's work to an art buyer. Robert found out and confronted Henry, who threw acid in his face then dumped the body into an acid vat. Henry almost used up the wealth of Robert's drawings until he met a wax statue maker and opened a museum with him. When one of the statues' arms was damaged Henry found a human hand beneath it. Henry confronted the sculptor, who removed a wax mask from his face, revealing himself as Robert.
Reprints
Keywords
Paris; Star-Bugle-Clarion

This story features Craig's first depiction of the Vault-Keeper.

The Werewolf Legend (Table of Contents: 3)

"Came the Dawn" forward by Bill Mason credits Fox as the writer, so Fox is added and Harrison is given a ?. Letterer credit by Craig Delich.

Fingers of Death (Table of Contents: 4)

Genre
detective-mystery
Synopsis
At last he had done it: he had killed Montrose to get a valuable gold chain, but someone was coming and he had to get away....he could return for the chain later. Later, the killer then broke into Montrose's coffin and there was the gold chain in the corpse's hands. He tried to pry the chain from those stiff fingers, but he couldn't budge it until finally, the fingers moved ever so slightly to release that chain. As the man bent forward to examine the chain in the light, the fingers of the corpse began to close again, this time around the man's throat, tighter and tighter and tighter until...
Reprints

Horror in the Night (Table of Contents: 5)

Another SuspenStory From The Vault of Horror! / comic story / 6 pages (report information)

Genre
detective-mystery; horror-suspense
Characters
Tom Hawkins; Jim; John Smith (in flashback, death); Emily Smith (John's wife, in flashback, death)
Synopsis
At the Hawkin's Tourist Colony, Tom is hitting the bottle as his friend Jim walks in, and explains that he is doing so because of a terrible dream he had the night before. In it, a couple come in to take a room for the night....but the woman fears that death is stalking her and kills a cat, believing it was death coming for her. The couple get into a fight he kills her, then shoots himself! Jim tells Tom it was just a nightmare and leaves. A few moments later, a car pulls up and the same couple Tom had seen in his dream were standing before him wanting a room!
Reprints
Keywords
Hawkins Tourist Cabins

Although drawn after Kurtzman drew "House of Horror" in The Haunt of Fear #15 (#1) (1950), the story in this issue was Kurtzman's first EC story to appear in print.

Tooth and Fang! (Table of Contents: 7)

Genre
crime
Synopsis
A knife flashes down and the owner of a circus falls to the floor dead. The killer then saw the shadows of the roustabouts just outside the tent, so he shoved money he had just stolen into his pockets, then looked for another way out. He spied a barred door at the back of the tent, opened it and hid there. Suddenly, there was a snarl behind him and he could see the eyes of a large panther. He tried to escape, but the barred door wouldn't open. He thought of screaming to alert the roustabouts who were leaving the area, but he couldn't be heard over the roars of the cat as it killed him!
Reprints

Genre
horror-suspense
Characters
Gloria; Ralph
Synopsis
Gloria was in a cab, running away from her husband Ralph...heading toward the train station and the train that would take her away from this man whom she thought was trying to poison her. Seated on the train, she kept imagining him at every turn and remembering the $25,000 insurance policies Ralph had taken out on them both...then she remembered that poison bottle he had brought home. Asleep in her berth, Gloria suddenly awakens at what she thinks is a scream, and goes to wake the conductor...but he is dead in his berth. In fact, everyone is dead in their berths! She jumps off the train and locates a farmhouse that has a freshly-dug grave outside. She enters the house and spies a coffin in it....then sees Ralph behind her, who grabs Gloria, puts her in the coffin, nails it shut, drags it to the grave and buries it. Suddenly, she awakens in her berth on the train.....sees Ralph with an attendant in a white coat, who takes her off to a nice house with bars on it so that Ralph can never get to her again!
Reprints