[Report from the Grave] (Table of Contents)

The cover title was taken from the 3rd story in the issue, on which the cover scene was based. 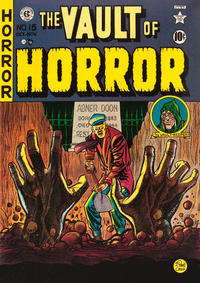 Genre
horror-suspense
Characters
The Vault-Keeper (host); Henry Davidson (writer); Henry's editor; real estate agent; Ted (Henry’s friend, death); Roger (Henry’s friend, death); Jean (Henry’s friend)
Synopsis
Henry is called on the carpet by his editor for always being late getting his stories in on time, and when his friends bother him so he can't write his stuff, Henry packs and heads for the country, and finds a nice, secluded house in which to work, and he buys Millford Manor, a home considered haunted. But his friends find him and later set up a spooky reception for him when he returns from the city. Scared to death, Henry flees, but the friends soon discover the truth about Millford Manor.
Reprints
Keywords
Millford Manor

Genre
horror-suspense
Characters
Helena Krivenston; Andor Krivenston
Synopsis
A father, bent on having his daughter marry another wealthy plantation owner instead of the man she really loves, mysteriously dies....with a voodoo doll lying on his chest!
Reprints

Terror in the Swamp! (Table of Contents: 5)

Genre
horror-suspense
Characters
The Old Witch (cameo); Professor Carl Ward; Marie Ward; Robert Colby
Synopsis
As two men paddle their way up the Okefenokee Swamp, they spot a man onshore asking them to go no further unless they never want to be seen again. They enter the man's cabin and he tells them about three people: Professor Carl Ward, Marie Ward and Robert Colby, who built a laboratory in the area, and who were trying to discover the "spark of life." They tested element after element without success, and finally the professor threw the beaker of matter into the swamp. However, the matter mixed with the elements in the swamp and began to live and grow, uncontrolled, devouring creatures left and right. Colby confessed what they were trying to do was wrong and as he stormed out of the lab, the mysterious matter attacked and devoured the entire cabin, with the professor and his daughter still inside! The story finished, the man the two way-farers not to continue on....but they did, and soon they came face to face with the living matter, which devoured them as the old man had warned!
Reprints

This story was originally titled in The Haunt of Fear #15, "The Thing in the Swamp," was NOT narrated by the Old Witch, had a different splash and a different last panel.
Script credit from Tales of Terror: The EC Companion.

Genre
horror-suspense
Synopsis
A man parachutes from a plane over a vast jungle, lands in a tree, loses consciousness, and awakens paralyzed. Trying to figure out a way to survive until help arrived, he allows ants and maggots, already crawling over his body, to enter his mouth, so that he could eat them for nourishment. Unfortunately, as the masses of ants and maggots increase, and realizes that THEY are eating HIM instead, he prays that his end will come swiftly!
Reprints

This text story is found on the inner halves of the two pages, with houses ads all around it, one for Crime SuspenStories #15 (with a Johnny Craig cover), and ads, with covers, for the Picture Stories From the Bible: the complete Old Testament, the Complete New Testament, Old Testament #1-2 and New Testament #1, with coupons for ordering them.

Report from the Grave (Table of Contents: 8)

Genre
horror-suspense
Characters
The Vault-Keeper (cameo); Warren Lake; Fred Coombes
Synopsis
The town undertaker, Fred Coombes, convened the session of the Vault-Keeper's Club in order to initiate a new member, Warren Lake. In order to be sworn in, he must exhume the body of the recently departed member, note the time on his wristwatch and report back to the club President. He does as he is told, but reports back that this whole thing must be a joke because the coffin contained nothing but rags and bones. Not believing him, all the members return to the cemetery.....but discover the corpse inside the coffin had to have been buried 50 years ago. One of the members, Vardy, had originally protested the digging up of the coffin in the first place, and since he had once roomed with the deceased, the members accuse Vardy of having killed his roommate. Vardy laughs and tells the members that they cannot prove anything....just try and find the deceased member's body! Just then, a muffled explosion is heard and a large gravestone topples over, and the members discover the body of Willie Balm, the deceased member, and Vardy quickly confesses. When asked why the explosion had occured, the undertaker mentions that he had forgotten to drill holes in the casket to allow the gases from the body to escape!
Reprints

Genre
horror-suspense
Characters
The Vault-Keeper (cameo); Paul; unnamed servant; Sam [aka "Zobo, the Living Corpse"] (death); Rita (death)
Synopsis
At a two-bit carnival, patrons paid 10 cents to see Zobo the man who stays buried under six feet of earth for 8 hours, able to accomplish it due to shallow breathing. His girl Rita digs him up, then off she goes to see her lover, Paul. Sam is mad when he finds out, but Rita convinces him that the love bit is a sham to drain the guy of his money. Rita convinces Sam to do his burial routine as a part of the plot, but really planning on keeping Sam buried for all time. When Sam catches wind of this, he plans his own surprise for Rita.....a plan that backfires big time.
Reprints

The Vault Keeper image on the splash is actually by Johnny Craig, taken from an earlier story that Craig did.