The cover title is taken from the 4th story in this issue, on which the cover is based. 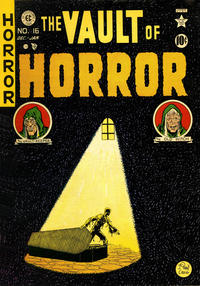 Genre
horror-suspense
Characters
The Vault-Keeper (host); Hubert Antone (villain, a werewolf, hotel manager, death); Madamoiselle Michelin (villain, a vampire, concert pianist)
Synopsis
Guests at a Hungarian hotel are murdered. Guests decide to leave and the owner is upset. In order to get business, he provides famous pianist Mademoiselle Micheline free accommodations. One night, after her arrival guest is horribly murdered, by a werewolf some say. Later that evening, the owner greets Miss Micheline, who heads up to her room. The owner then turns into a werewolf and follows her, but he can find no trace of her. He opens the lid of her piano and finds dirt. As he ponders this, Mademoiselle Michelin, revealed as a vampire, springs out of the darkness and attacks him!
Reprints
Keywords
monsters; vampires; Venetian Gardens Hotel; werewolves

Genre
horror-suspense
Characters
The Vault-Keeper [cameo]; Stanley (Flint's nephew, death); Ezra Flint (villain, undertaker)
Synopsis
On the death of his mother, young Stanley is placed in the care of his uncle, Ezra the town undertaker. Soon, Stanley discovers that his uncle takes jewelry and other valuables from the corpses before burial. Discovered, Ezra kills Stanley and puts him in an available coffin. However, Stanley is too long for it and Ezra shorten him. After the interment, Ezra hears a knock at the door and discovers only Stanley's bandaged foot on the step. Later, another knock leads to Stanley's other foot. A third and final knock brings Ezra face to face with Stanley -- on crutches!
Reprints

Genre
crime
Synopsis
A man stakes out the city subway platform for a week, hoping to see the man he is supposed to kill. One night he spots him, and the two have a furious struggle. Both go over the platform onto the tracks below, where the victim collapses on the third rail and is electrocuted. Unfortunately for his murderer, the victim's hand grasped the killer's ankle, and the volts paralyzed him as he watches a subway train bearing down on him!
Reprints

This text story is found on the inside halves of each page. To the outside are house ads, one featuring a promo for Weird Fantasy #16 [with a cover by Al Feldstein], the other featuring ads, with covers, for Picture Stories From the Bible: the Complete Old and New Testaments, as well as Old Testament #1-2 and New Testament #1.

Characters
The Vault-Keeper (cameo)
Synopsis
The VK discusses last issue's stories in popularity, as voted on by the readers, then informs the readers that the Old Witch will become a permanent feature in the Vault of Horror.
Reprints

The Grave Wager (Table of Contents: 5)

Genre
horror-suspense
Characters
The Vault-Keeper (cameo); Pirro, the Wax Man
Synopsis
Paul and Clyde bet $50 that Roger won't spend the night with a corpse. The two secretly for Pirro, the Wax Man, from a local freak show to play the part of a corpse to better scare Roger. The "body" is delivered to Roger's apartment, and Roger kicks back thinking everything will go smoothly. Suddenly the sheet over the corpse moves and the body gets up and walks toward Roger. The next morning, Paul and Clyde make their way to Roger's apartment to have a laugh. They enter the room to find Roger a raving maniac and the REAL corpse of Pirro -- beaten to a pulp!
Reprints

Genre
horror-suspense
Characters
The Old Witch (cameo); Pete Luger
Synopsis
Convict Pete Lugar he devises a scheme to somehow switches places with a corpse being taken out of the prison, in order to make good an escape. Following the next execution at the prison, Lugar switches places with the corpse, expecting a confederate to free him from the executed man's grave. However, inmates come into the morgue, nail the coffin shut, and take it to the prison's new crematorium!
Reprints