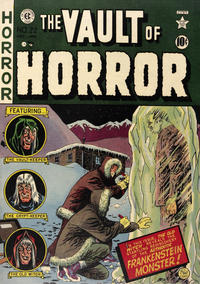 Fountains of Youth! (Table of Contents: 1)

Genre
horror-suspense
Characters
The Vault-Keeper (host); Kenneth Martin; Eileen Martin (Kenneth's sister, death); Miss Blanchard; Madam DuBois (villain, death)
Synopsis
Eileen responds to a newspaper ad asking for a traveling companion for a heavily veiled Madam DuBois, who is traveling abroad, even though her brother Ken is not too happy with the idea. Then she and Madam DuBois board a cruise ship. Unfortunately, Eileen mysteriously passes away, and Ken investigates. A shipboard doctor informs him that Madam DuBois is similar to a human vampire, who prolongs its life by sapping the youth of their victims. By the time the pair get to DuBois' cabin, her next victim is already withering and dying before their eyes!
Reprints

The Monster in the Ice! (Table of Contents: 2)

Genre
horror-suspense
Characters
The Old Witch (host); The Frankenstein Monster; Gerald Dawson and Herbert Campbell (geologists)
Synopsis
As Gerald Dawson sits as his desk in a shack in the Arctic, Herbert Campbell enters, telling him that their Eskimo guide refuses to take them any further. Dawson goes to see Lomo in his igloo, and the Eskimo tells him of the monster in the ice, and that no one who sees it comes back in their right mind. Dawson & Campbell rig up a dog-sled and go to the site, spot the monster and dig its ice-encased body out and take it back to their shack. They show the body in ice to Lomo and he freezes in fear, especially when he is ordered to chip the body out of the ice! While that is happening, Dawson and Campbell kick back, telling themselves that this whole thing reminds them of Mary Shelly's book about Frankenstein. Suddenly, they hear a scream and a crash, and enter the adjoining room and see the window broken out and Lomo shaking in fear. Now they know the creature must be put back into the ice, so they go out and dig through the ice to water, and they hope to lure the monster into the trap. The monster shows up....jumps into the hole and drags both men down with him. One year later, the U.S. Air Force decides to build a base near that very spot and two airmen happen to spot the bodies trapped in the ice. So......they start digging out the bodies to see what they can determine what happened to them.....
Reprints
Keywords
monsters

Synopsis
He had been sentenced to ten years in the sizzling cells of El Malein Prison out in the Sahara Desert, but he knew he couldn't make it. As the airplane he was in flew nearer to that prison site, he jumped out of the plane and pulled the ripcord on his parachute. He landed, and for the next five days, he braved the heat and whipping sand, trying to find water. Then he saw the tall pond fronds that indicated an oasis, and it renewed his waning strength. Just then, the fronds disappeared; it had all been a mirage! But he made his choice and he still had his freedom: the freedom to die in agony!
Reprints

This text story was printed on the inner halves of the two pages, with EC house ads to either side. One promoted Weird Fantasy #10 [with an Al Feldstein cover], while the other ads [with covers] promoted the Picture Stories From the Bible series: the Complete Old and New Testaments, the Old Testament #1-2 and the New Testament #1.

VK's column begins with his campaign against the Old Witch and Graham Ingels, and a mock letter from his local draft board, followed by the reader's popularity poll for last issue's stories. Then letters are printed from Ellen Louise Phillips, Joe Carroll and Rand Rensvold, followed by the promoting of the photos of the three GhouLunatics!

Genre
horror-suspense
Characters
The Crypt-Keeper (host); Maxwell Larkin (death); Steven
Synopsis
Max was a noted sport fisherman, but Steven hated the sport, which he considered cruelty to animals. Max outfitted his reel with the latest gadgets and cast into the water. Soon he got a strike and reeled in his beauty. Steven, sick to his stomach, went back to the car and drove off, taking Max's lunch with it. Spotting a candy bar on the beach, he shoved it in his mouth, never noticing the thin, silky, nearly invisible thread attached to it. When Steven returned, he saw the horrible sight of Max bobbing up out of the water and being drawn farther and farther out to sea!
Reprints

What the Dog Dragged In! (Table of Contents: 6)

Genre
horror-suspense
Characters
The Vault-Keeper (host); Betty Marsh; Jerry the dog; Roger Cartwright
Synopsis
Blind Betty's dog Jerry is hit by a car but cared for by wealthy Roger Cartwright, who returned her dog to her. Betty was happy to have company and invited him back, which he did and they soon grew quite close. One day, as Roger left her house in his car, he didn't see the truck coming from the other direction. Betty sent Jerry after him and day after day Jerry returned without Roger. Until one day Jerry came in with Roger.
Reprints