[Graft in Concrete] (Table of Contents)

The cover title is taken from the 2nd story, from which the cover was based. 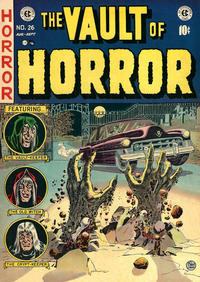 Genre
horror-suspense
Characters
The Vault-Keeper (host); Willow Dree (actress, vampire); Al Bolton (photographer, in flashback); Bradbury Phillips (actor, ghoul)
Synopsis
Actress Willow Dree never had been successfully photographed, all attempts ending with a photo displaying only the background. Fellow star Brad Phillips suggests the two get away from all photographers and go on a skiing trip together. Unfortunately for the pair, they get snowbound in a cabin after a blizzard. Several days later, when a rescue team comes upon the cabin, they discover a horrifying scene inside.
Reprints

Graft in Concrete! (Table of Contents: 3)

Genre
horror-suspense
Characters
The Crypt-Keeper (host); Godfrey Hornsby (villain, President of Hornsby Construction); Mayor John Applegate (villain); City Council [Williams; Barlow] (villains)
Synopsis
Hornsby threatened the Mayor to get the road contract he was after and had a document that proved the Mayor had gotten a kickback on the sale of land for the new school. The City Council members, also having skeletons in their closets, agreed to Hornsby's request and a road was built through the property containing a cemetery. The next morning, state troopers discovered the council's empty car, with the area all around the car neatly paved. And as they looked more closely, they discovered the bodies of the council neatly inset into the road's fresh new pavement!
Reprints

Genre
horror-suspense
Characters
Jacques Carigot
Synopsis
Jacques slowly climbed the stairs to the guillotine, smiling as he did so....a sure trait of the man named "Jacques the Joker." He was to die that day for the deaths of 20 innocent people at his hands.....a man thought of as the deadliest killer ever to walk the streets of France. The Chief Jailer stood at the base of the platform, wondering why this man asked for a bottle of purple ink and some paper as his last request....until he figured out that Carigot would swallow the ink and poison himself, so he had substituted harmless vegetable dye for the ink! Just then, the executioner had Carigot get to his knees and take his position below the sharpened blade. As he unwrapped the scarf around Carigot's neck, he was shocked to see a succession of crude dashes around the neck with these words: "Please cut along the dotted line! Thank you.....The Joker!"
Reprints

Characters
The Vault-Keeper (head view)
Synopsis
VK's column starts off with letters from Jim Svoboda, Jerry Wise, Alvin Bowker, Larry Barnes, James Aguilera, Bernard Dewey, Ernest Shute and an unnamed person --- all of whom are writing in response to Mrs. Phelan's letter a few issues back criticizing EC comics as garbage. The VK reviews reader's voting on the previous issue's stories, plugs the 2nd Annual Tales of Terror anthology and the photos of the three GhouLunatics, as well as subscriptions to his mag.
Reprints

Genre
horror-suspense
Characters
The Vault-Keeper (host); Zachary Boxer
Synopsis
Zachary was the undertaker in town and was at the door of an apartment, whose tenant had called him. As he entered, the odor of incense was almost over-powering as the person inside said to keep the light off. He informs Boxer that he visited his doctor not long back and was told he had some sort of mental problem that he needed professional help with. And the psychiatrist inform this man he had schizophrenia and needed therapy on a regular basis. Even with this, the man's spells caused him to do things he normally never would, as his dark side became more and more predominant. Then it happened....he went in for his normal session, and, an instant later, saw the psychiatrist's mutilated body lying at his feet. He decided to leave the country for Haiti, went to see a voodoo witch doctor and asked him to destroy his evil half. The witch doctor created a doll....half evil and half good, and stuck a pin through the evil half and told the man it had been destroyed. As the man finishes the story, and turns on the light, he tells Boxer the reason why he was called: to embalm his rotting, evil half of his body!
Reprints

Genre
horror-suspense
Characters
The Old Witch (host); Stanley (death); Emma (Stanley's lover); Bernice's maid; Bernice (villain, Stanley's fiancee)
Synopsis
Bernice, after a 15-year romance with Stanley as his fiancée, was tired of his Saturday fishing trips and all the fish-mounted trophies she had to care for. She wanted to get married, and so, one Saturday morning, she followed him on one of his trips where she discovered that Stanley was two-timing her with another woman. Bernice decided that there was to be one more mounted trophy in her home: that of Stanley!
Reprints