The cover title was taken from the third story, on which the cover was based.

The cover title was taken from the 3rd story, from which the cover was based. 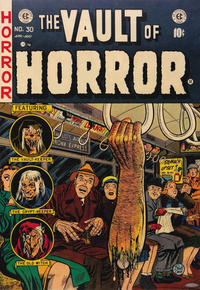 Genre
horror-suspense
Characters
The Vault-Keeper (host); The Blair sisters [Amy; Susan] (villains); Ed King (villain, racketeer, death)
Synopsis
Ed King was a racketeer trying to find a way to bilk the Blair sisters out of their millions. When he saved their cat, he was invited into their home, and since both ladies liked him, he decided to pretend to be twins and marry both of them, using excuses to be away a week at a time in order to be with his other wife. Ed made a huge mistake while tanning one day, and the sisters soon discovered what was going on, and decided to deal with this bigamist. They took an axe and split him right down the middle, so that they each would have "half a husband"!
Reprints

Who Doughnut? (Table of Contents: 3)

Genre
horror-suspense
Characters
The Crypt-Keeper (host); Danny Hughes (reporter, death); Pat (Danny's secretary, death); various Policemen; an octopus (villain)
Synopsis
Seven women had been murdered and the Police were baffled by the doughnut-shaped wounds all over their bodies, blood drained and traces of sea brine on their skin and clothing. Danny Hughes, crime reporter, was on the scene and mocked the Police for not having a suspect. The next day, Danny's secretary was murdered in the same way, and was suspected until another killing occured. Danny remembered seeing a strange figure near Pat's home, and when he saw it again, he followed it to an aquarium, and came face to face with a blood-sucking octopus!
Reprints

Reference is made to H.P. Lovecraft's Cthulhu.

Genre
horror-suspense
Synopsis
He could hear the Police chasing him as he ran inside the building, clutching the gems in his hand and looking for a hiding place. He entered a large circular room with glass enclosures all around him....then he spotted something moving behind one of the glass walls. He saw fish....so he decided to hop into the water and go under to elude the Police. It worked....until he felt a horrible pain in one leg, and looked up to see the sign hanging above the tank: PIRANHA! Quickly he was surrounded, as he felt himself being torn to shreads!
Reprints

Genre
horror-suspense
Characters
The Vault-Keeper (host); Bill Gaines; Al Feldstein; three pre-med students (all die); various Police officers
Synopsis
Three medical students play a series of practical jokes using actual human body parts and watching the reactions of various people. The med students roared with laughter, but then seriously wondered what would happen when it was discovered parts of a cadaver was missing, so they went to get the remaining body parts and dispose of them, not noticing a pile of coiled-up intestines that were moving toward them. The next day the Police found the body parts and the students: in a refrigerated unit with the intestines coiled around their necks.
Reprints

In this story are cariactures of Bill Gaines and Al Feldstein in the first panel on page 2 and in many other panels throughout the story.

Script revision (from Feldstein) and letterer credits by Craig Delich.