The cover MAY have been based on the 2nd story in this issue. 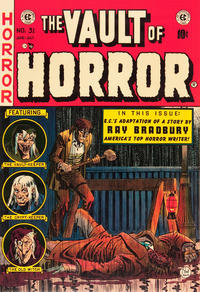 Easel Kill Ya! (Table of Contents: 2)

Genre
horror-suspense
Characters
The Vault Keeper (host); young artist; artist's fiancee (death); art enthusiast; unnamed doctor (death)
Synopsis
The man went to a bridge he intended to jump from to his death at age 29. He was a lonely, unappreciated artist who was going to end it all when a car slammed into a barrier and from the crumpled wreck a woman staggered out. He was inspired to paint the scene, then sold it to a certain gentlemen. This scenario played out again and again as horrible accidents gave him inspiration to paint until he met a girl he was to marry. When she had a horrible accident and needed an operation, the artist killed someone for inspiration to paint the picture to sell, but inadvertently made a horrible mistake.
Reprints

Genre
horror-suspense
Characters
The Crypt-Keeper (host); Michael Lane; Lt. Phil Dolan
Synopsis
Lieutenant Dolan looked at the roots of a peach tree that held the corpse in its roots, and ordered the corpse and tree be taken in for autopsy. He turned to Michael Lane, the murderer, who now confessed to why he did the act. Her name was Sarah, young, wealthy and beautiful, and he got what he wanted from her until she realized that he didn't love her....just her money. There was a terrible fight, then talk of divorce. Finally one night, as she ate a peach, he killed her, buried her in the garden and destroyed all of her possessions, giving the impression she had left him. The problem was that she has swallowed the peach pit, and from that pit, a peach tree began to grow. Seven years passed by and finally the tree bore fruit.....Lt. Dolan came by the house, hoping to trap Lane into admitting the act he suspected him of. Then as they walked into the garden, Lane reached for a peach and bit into it....quickly spitting it out. The Lieutenant now knew where to look for Lane's wife's body, for that peach had blood inside it!
Reprints

One Shot (Table of Contents: 4)

Genre
crime
Characters
Metcalf
Synopsis
Metcalf hid in the bushes with a rifle, eyeing his prey standing just above him. A shot rang out and the man fell back and tumbled 1000 feet down over a sheer rock wall. Metcalf went down and viewed the body of his victim. To give the appearance that there had been an exchange of shots, he took the rifle and aimed at a solitary rock above him, and shot at it. Unfortunately, it then dislodged many rocks, all which came crashing down upon him. As he lay crumpled and broken at the base of that wall, he suddenly spied that single, last meteor of a rock heading towards his face and closed his eyes.
Reprints

Synopsis
Letters from Montana Lamb, Don Thompson, Peter Kroll, Ted Finch, Ronald Wade, Matt Flynn and Norman Benedict were printed. V-K thanks readers for responding to the plea to buy and ask for more EC's from their dealers, then pushed the 3rd Annual Tales of Terror volume and subscriptions.
Reprints

The Lake (Table of Contents: 6)

Genre
horror-suspense
Characters
The Vault-Keeper (host); a little boy; Margaret (the grown-up little boy's wife); lifeguard; Tally (death, in flashback)
Synopsis
Years ago, a little boy and his young girl friend, Tally played at the beach and built sandcastles together. One day, Tally swam out into the water and drowned, leaving the sandcastle undone, and no closure for the boy. Years later, the little boy, now grown, got married and returned to the beach with his wife, and met with the old lifeguard, who showed him Tally's body in a sack. Once more, the young man returned to the beach, built an entire sandcastle and walked back to his wife, Margaret, leaving the past behind.
Reprints

Story was adapted from Ray Bradbury's "The October Country," which appeared in May 1944's "Weird Tales" and the anthology "Dark Carnival."

Genre
horror-suspense
Characters
The Old Witch (host); Edwin (Jennifer's husband, death); Bert (Jennifer's old friend, death); Grace (Jennifer's acquaintance, death); Sidney (a small boy, death); a blind man (death); Thelma (an old woman, death); two detectives [Steve; other unnamed]; Jennifer (villain)
Synopsis
Jennifer came home in a cheerful mood and went into the bedroom to see her husband, who had been paralyzed in bed for many years. She excitedly told him just how wonderful it felt to actually be needed by other people: people who were unhappy for a variety of reasons, and how she cheered them up by killing them. When the two detectives came to the home to investigate, they found Edwin already dead by cyanide poisioning, and Jennifer happy that she could make him happy as well.
Reprints