On sale date from date stamp on cover.

[Out of His Head] (Table of Contents)

Cover title from 2nd story, from which the cover is based. This cover was censored as being much too gory for readers, as it featured a meat cleaver stuck in the ghoul's head. The Gladstone and Gemstone reprintings display the actual cover. 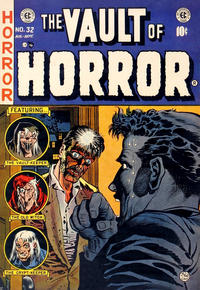 Genre
horror-suspense
Characters
The Vault-Keeper (host); unnamed woman; three asylum employees
Synopsis
Her mind was whirling as three horrid creatures hovered over her, asking her her name, and she ran to escape. A series of events: thrown into boiling water, plunged into ice, poked with a hypodermic, strapped into an electric chair, and put into a small room that kept shrinking. She thought she was going insane, but the men told her everything had been in her mind and that she was an inmate in an insane asylum. She began to quiver and as they began to ask her her name, she suddenly remembered that THEY were the ones trying to persecute her!
Reprints

Genre
horror-suspense
Characters
The Crypt-Keeper (host); Stanley (Alex's law partner, death); unnamed doctor; Alex Melton (villain, lawyer, death)
Synopsis
Alex had murdered Stanley with an axe to his head, trying to blame the death on a maniac. It seemed, however, that the dead man kept haunting him day and night, and everywhere Alex looked, his former law partner was still there. Unable to stand it any longer, he blinded himself with an icepick. He was taken to the hospital and operated on, and when the bandages were removed, he saw someone. He figured it was Stanley again and ran to the window and jumped out to his death. The doctor looked out the window and all he could say was that the man must be mad!
Reprints

Genre
horror-suspense
Characters
Brewster; Crawford
Synopsis
With the plane in the air, Brewster emerged from hiding in the back of the plane, wrench in hand, and crept to the cockpit, where he hit Crawford over the head. As the plane spiraled out of control, Brewster ran to the emergency door and jumped out, waiting to pull the ripcord of his parachute until the last second possible so that no one would see him. As he came down, he watched the plane crash into a grove of trees, splintering the ends, and burn. But a sudden shift in the wind brought Brewster closer and closer to the splintered branch limbs until he jammed into them which stopped his descent. In agony, he noted that the limbs had torn open his stomach, and as he lay dying, his body writhing on the end of a branch, he felt like some insect squirming on a needle in a science lab!
Reprints

An Ample Sample (Table of Contents: 6)

Genre
horror-suspense
Characters
The Vault-Keeper (host); Hannah (Irwin's wife, death); Bert; Irwin (villain)
Synopsis
Irwin was telling his neighbor Bert of how he and his wife Hannah fell in love and how Hannah loved expensive chocolates so much. She got fatter as he had to do without vital necessities, and he just couldn't take it anymore. Irwin admitted to killing her and asked Bert to come over to his house. As they walked in, Bert gasped in horror as he spotted a giant, hand-made chocolate box, marked with different types of candy, and pieces of Hannah in each part!
Reprints

The visages of the Vault-Keeper on pages 1 and 6 are a photostat by Johnny Craig, taken from his story, "Werewolf Concerto".

Evans drew himself in as neighbor Bert throughout the story.

Genre
horror-suspense
Characters
The Old Witch (host); Jasper Milliken (gardener, death); Niles Fairchild (villain, Jasper's employer, death); Tom Kelton (villain, Jasper's accountant)
Synopsis
Jasper went to his cottage on the Fairchild Estate and counted up the $4,970 he had been saving and knew as soon as Mr. Fairchild paid him the last $30 he owed him, he'd be set: set to have the funeral that was denied to his parents. Unfortunately, Niles Fairchild was bankrupt, and desperately needed $5,000 to get him out of the trouble he was in. When Jasper refused to lend him the money, Fairchild and his accountant murdered Jasper and took the money. Jasper's corpse killed Fairchild, removed him from the man's coffin and took his place, and got the funeral he wanted.
Reprints
Keywords
Fairchild Estate