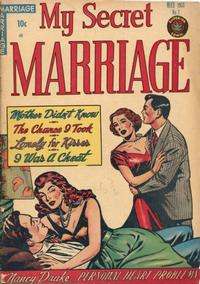 First Line of Dialogue or Text
How do you tell your mother that you're married, when that's the...
Genre
romance
Characters
Edyth; Bert; Edyth's mother; Edyth's father
Synopsis
Edyth’s mother tries to act and look younger than her age. Edyth is secretly married to sailor Bert, fearing her mother will feel “old” if she finds out. However, Edyth and Bert eventually break the news and her mother is consoled by her father.

Lonely for Kisses (Table of Contents: 4)

First Line of Dialogue or Text
We were an ordinary average married couple until I got ambitious...
Genre
romance
Characters
Julie; Frank; Agnes; Miss Field; Mr. Webster
Synopsis
Julie starts a small dressmaking business to supplement the meager income that her husband, construction worker Frank, brings home. However, the business becomes very successful and grows until it consumes most of Julie’s time. When Julie sees Frank dining with one of her models because he’s lonely and tired of eating by himself, she realises her marriage is at risk. She sells her business and reconciles with Frank, and soon has a baby to occupy her time.

First Line of Dialogue or Text
Introducing Nancy Drake, who will endeavor to analyze and solve problems of the heart...
Genre
advocacy; romance
Keywords
advice

Letters from anonymous readers regarding love problems with advice given by Nancy Drake.

The Chance I Took (Table of Contents: 6)

First Line of Dialogue or Text
I was so grateful to a wonderful boss for the...
Genre
romance
Characters
Carrol; Mr. Stone; Joe Stone
Synopsis
Joe returns from military service but seems uninterested in joining his father’s company. Mr. Stone asks his assistant Carrol to undergo a makeover and then seduce Joe into taking a job with the firm. Joe falls in love with Carrol instead. He’s angry when he learns of the plot, but Joe decides he loves Carrol enough to marry her and then settle down and work for his father.

First Line of Dialogue or Text
Then it's true April... you will marry me?
Genre
romance
Characters
April Blake; Marc Clayton; Kip Edwards; Aunt Peg
Synopsis
April is engaged to Marc but cheats on him with Kip. When the two men meet, April leaves. She later tries to call Marc to apologise, but he’s not home, so she makes a date with Kip. April realises Marc is the one she loves, but decides to break their engagement. Marc tells her that he and Kip made a deal: they would not call her, and the first one she called would win her hand. April explains she had called Marc first, and they reconcile.