[The Gala Opening] (Table of Contents)

[pantomime; no dialogue]
Assumed title is excerpt of headline, "The Story Behind The Cover: 'The Gala Opening'", which is a text story accompanying full-color thumbnail reproduction of front cover on page 28. 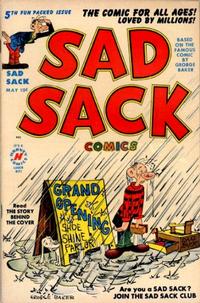 Bobby Shelby and His Pals Form a Bike Safety Club (Table of Contents: 4)

The PSA appears on page 4. Verified Lee Elias signature in panel 5 at left on page 4 upper half.

All for One (Table of Contents: 6)

Cost of Living (Table of Contents: 9)

Being Helpful (Table of Contents: 10)

* This type of humorous/satirical story with illustrated violence would probably have been rejected by the Comics Code Authority had it been in place five years earlier.

Room for Rent (Table of Contents: 13)

Genre
humor; satire-parody
Characters
Landlady; Sad Sack; Policeman
Synopsis
Sad Sack complains to a policeman after being violently evicted for not being able to pay his 50.00 USD rent, but the policeman pleads with the landlady to offer him Sad Sack's apartment instead.
Keywords
apartment; eviction; landlady; landlord; overdue rent; rent; rent due; tenant; unpaid rent

Rags to Riches (Table of Contents: 14)

Genre
humor; satire-parody
Characters
Sad Sack; waiter
Synopsis
After being chewed out by patron Sad Sack for not refilling his water, the waiter collapses onto a chair after which Sad Sack rushes to the kitchen to get him a glass of water.
Keywords
collapse; diner; dizzy; eatery; glass of water; grill; kitchen; restaurant; service; waiter; water

First Line of Dialogue or Text
If you're not a Sad Sack yourself, perhaps you know someone who is.
Genre
humor
Synopsis
Sad Sack Contest offers 10.00 USD for first prize and 5.00 USD as a second prize or a special one year subscription by sharing a 'Sad Sack' experience in a letter or on a penny (0.01 USD) postcard.
Keywords
contest; first prize; prizes; Sad Sack Contest; second prize

Entrants could submit their sad stories to:

Eleven panel comic strip printed as a full-bleed centerfold spread across pages 18 and 19.

The Gala Opening (Table of Contents: 30)

The story behind the cover was likely owner/president/publisher Alfred Harvey's idea which was rendered as a sketch (pencils and inks) in collaboration with cartoonist George Baker. A miniature reproduction of the full-color cover complements this text story.

* This type of mature lusty/romantic story would probably have been rejected by the Comics Code Authority had it been in place five years earlier.

Can You Solve These Puzzlers? (Table of Contents: 32)

The Birthday Present (Table of Contents: 33)