Lobo wears a chain around his neck with a hand grenade dangling from it like a medallion. 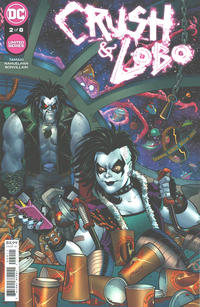 I'm Fine! aka Travel Mugs are Very Useful in Space (Table of Contents: 1)

First Line of Dialogue or Text
My name is still Crush.
Genre
science fiction; superhero
Characters
Crush; Lobo; alien scientist leader with TV head (coffiologist); horned reptilian aliens; Katie (Crush's girlfriend, in flashbacks only); alien tramp; alien tramp's space-helmeted dog; "Space Bru" coffee server (alien); various inmates at space-penitentiary; robot prison therapist
Synopsis
Traveling through space to visit Lobo in a space-penitentiary, Crush must endure flashbacks of her first meeting Katie and of later conflict with her - and a surprise attack by the "alien scientist leader with a TV head" (from the previous issue) who is now reduced to working in a space coffee joint as a barista or, as he puts it, a "coffiologist". After her spacecraft is destroyed while again besting her TV-headed adversary, Crush hitches a ride on a "penitentiary space garbage truck" to reach the prison. She identifies herself as Lobo's "kid", and is about to enter...
Keywords
coffee; coffee joint; Czarnians; daughter; father; flashbacks; fourth-wall-breaking; outer space setting; prison; rehabilitation; relationship break-up; relationship meeting; spacecraft; therapy