• First cover art by long-time 'SAD SACK' cartoonist Fred Rhoads for Sad Sack Comics (Harvey, 1949 series).
• After brief try-out as a 'SAD SACK' cartoonist in late 1953, Fred Rhoads negotiated an oral agreement with Harvey Publications founder and president Alfred Harvey wherein Rhoads was considered, given vacation bonuses, paid, referred to, and treated as an employee* from 1954 to 1977.
• Fred Rhoads was denied unemployment benefits by the Arizona Employment Department upon losing his source of steady income from Harvey Publications, Inc. when it stopped purchasing his 'Sad Sack' artwork in September 1977. Believing---based upon good faith representations, an oral contract, and prior full-time work schedule---that he was a legitimate "employee," Rhoads hired the Tucson, Arizona law firm of Lovallo & Stirton to file suit against Harvey Publications on May 26, 1978 for payment of unemployment compensation and unpaid royalties to which a jury trial agreed and awarded him 2,580,000.00 USD inclusive of punitive damages.
• Harvey Publications, Inc., however, replaced their prior legal team, then hired Messing & Glicksman, P.C. of Tucson to litigate an appeal in which Harvey Publications, Inc. ultimately overturned the lower court's jury verdict based on a technicality† on December 2, 1981. 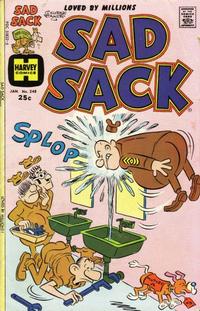 The United Nations Children's Fund Brings Good Things All Over the World (Table of Contents: 2)

The Hip Sargent (Table of Contents: 15)

First Line of Dialogue or Text
Sad Sack was sitting in the audience at the TV station ...
Genre
humor; military
Characters
Private Sad Sack; ex-con; retired gangster; M.C.; two Bureau of Internal Revenue agents
Synopsis
Sad Sack competes in a parody of "The Price is Right" TV game show, wins a Chinese junk and a B-29 Bomber from World War II, but is threatened with jail for not being able to pay income tax on his prizes.
Reprints
Keywords
B-29 bomber; Chinese junk; ex-con; game show; gangster; income tax; prizes; taxes; TV show