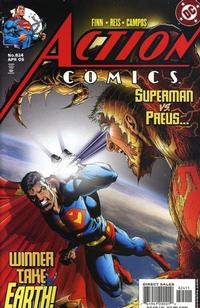 Genre
superhero
Characters
Superman; Jimmy Olsen; Melinda (dies); Martian Manhunter (cameo); Preus; Repo Man [Jesse] (cameo); Aquaman (cameo); Hawkman (cameo); Green Lantern [John Stewart] (cameo); Doomsday (cameo); Gog (cameo); Wonder Woman (cameo); Flash (Wally West, cameo); Booster Gold (cameo); Blue Beetle [Ted Kord] (cameo); Zatanna (cameo)
Synopsis
Preus has captured both the Martian Manhunter and Jimmy Olsen, and uses Jimmy's watch to signal Superman. He is attacked by missiles, then by a suicide bomber, and by a mob of Preus' followers. Finally, Preus himself attacks. Superman manages to free Jimmy and the Martian Manhunter, and then tries to use Kryptonite on Preus with no success. The Martian Manhunter senses that something in Preus' armor is helping him, so Superman pulls it off, weakening Preus to the edge of death. Superman takes him to Metropolis to try to get to S.T.A.R. Labs to save his life, but is confronted by Gog.
Reprints
Keywords
signal watch

Story continued from the previous issue and continues in the next issue. J. D. Finn is apparently a pseudonym, but it is not known for who. Some had speculated it might be Chuck Austen, but, in an interview published on Comic Book Resources on 2006-02-14, Chuck denies being J.D. Finn, and thinks it's editor Eddie Berganza. Whoever it is, might have chosen JD Finn from JD Salinger and Huck Finn.

Will Eisner The True Spirit of Comics (Table of Contents: 2)

Characters
The Spirit; Will Eisner

Tribute to the late Will Eisner, including illustrations of his characters over a photo of Will.