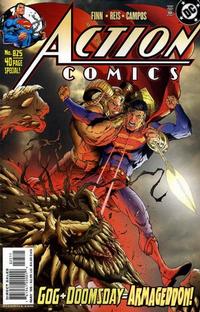 The Four Horsemen (Table of Contents: 1)

Genre
superhero
Characters
Superman; Gog; Superman (Kingdom Come) (cameo); Repo Man [Jesse] (cameo); Preus; Doomsday; Batman (cameo); Martian Manhunter (cameo); Superboy [Kon-El] (cameo); Lois Lane; Jonathan Kent; Martha Kent; Lana Lang; Clark Ross
Synopsis
Gog reveals that he lost his parents in the first Doomsday fight, and blames Superman for that. An army of Gogs plucked from time now attacks Superman. Doomsday joins the fight, on Superman's side (for now). Superman attacks Gog one more time, but loses. Gog then imagines the future into over 500 years, but, although beaten Superman never yields, and says he would never take a life. This affects future Gog (and future Doomsday), so he goes back and heals Superman at the point of the end of the original fight, which enables Superman to defeat that Gog. Superman then rushes to Smallville to find the Gog attacking there already dead. The present-day Gog finds something, and slips away.
Reprints

Story continued from the previous issue. Later, in Justice Society of America (DC, 2007 series) #13, it explains that the Gog in this story was not from the future, but just deeply disturbed, and that Gog was possibly tuning into the Kingdom Come universe. J. D. Finn is apparently a pseudonym, but it is not known for who. Some had speculated it might be Chuck Austen, but, in an interview published on Comic Book Resources on 2006-02-14, Chuck denies being J.D. Finn, and thinks it's editor Eddie Berganza. DC have listed Joe Kelly as the writer on their website, but other than that, there's nothing proving that J.D. Finn is indeed Joe Kelly. Whoever it is might have chosen JD Finn from JD Salinger and Huck Finn.