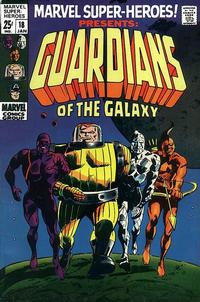 Guardians of the Galaxy! (Table of Contents: 2)

next appearance in MARVEL TWO-IN-ONE #4

Letters from Steven Grant, Jim Meschwitz, David Anglin, Jimmy Golden and Gary Dahlberg are printed, along with an illustration from the cover and Marvel Super-Heroes (Marvel, 1967 series) #16.

Genre
superhero
Characters
Namor the Sub-Mariner; un-named Mermaid; Future Man; Madame Death; the Pacific Pirates (introduction for all)
Synopsis
Namor arrives in Asia along the China coast, and soon discovers the presence of the Pacific Pirates, modern day raiders who use a submarine as their weapon of attack. They are secretly saved from Namor and enlisted by Madame Death and Future Man to help create a massive tidal wave that will wipe out most of the population of Asia.
Reprints

Job Number
SL-840
Genre
superhero
Characters
Miss America [Madeline Joyce]; Future Man; Madame Death; living mummies (introduction, all die)
Synopsis
Miss America, while flying over the continent of Africa, notices a caravan below being attacked apparently by living mummies. The mummies have been revived by Future Man's "life battery", which has been converted to give off "life currents", allowing the villain to use thousands of these mummies from unknown tombs to sweep, like an Army, over the entire continent, wiping out all living souls.
Reprints

Genre
superhero
Characters
The Human Torch [Jim Hammond]; Toro; Future Man; Madame Death; desert gang of badmen (introduction for all)
Synopsis
Future Man uses a common incendiary bomb to start a huge forest fire in North America for the purpose of decoying the Torch and Toro long enough so that he and Madame Death can enlist the aid of desert badmen, who supply the villains with Uranium-235 so that they can produce an atomic match.....a match that will burn anything that has atoms.
Reprints

War Between the Worlds! [Chapter 7] (Table of Contents: 9)

Genre
superhero
Characters
The All-Winners Squad [Captain America (see note); Bucky (see note); Miss America [Madeline Joyce]; Whizzer [Robert Frank]; Namor the Sub-Mariner; Human Torch [Jim Hammond]; Toro]; Future Man; Madame Death
Synopsis
When Future Man is seemingly stopped at every turn by the All-Winners Squad members, he threatens to make a call for help into the future, requesting hundreds of future men be sent by giant spaceships armed with Neutronic Bombs! However, the Squad attacks before this can happen, and, by a quirk of fate, controls on the villain's ship are locked to keep going far in the past, thus ending the threat of future attackers.
Reprints

The next All-Winners Squad story is in What If? (Marvel, 1977 series) #4, which occurs chronologically before this one and retroactively establishes that the post-war Captain America and Bucky here are Jeff Mace (a.k.a. The Patriot) and Fred Davis. The next chronological appearance of the All-Winners Squad, Future Man and Madame Death is in All Winners Comics 70th Anniversary Special (Marvel, 2009 Series) #1.