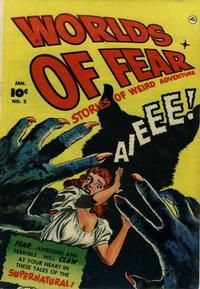 Genre
horror-suspense
Synopsis
Frank Thompson misses his plane and travels by train instead. But since the plane crashes and he should have been among the victims, he is taken to a strange city of lost souls - where he has to run for his life.
Reprints

Baily can be spotted by his faces which look a bit old, with marked lines under the eyes and cheekbones.

Curse of the Werewolf (Table of Contents: 2)

Genre
horror-suspense
Synopsis
Elderly zoologist Emil Sonsine tries to save a man's life by giving him blood, but gets a werewolf affliction in return. He is torn between a new powerful self and feelings of guilt and remorse. When Sonsine learns that his sweetheart loves another man he confronts his rival in a deadly showdown.
Reprints

Genre
horror-suspense
Synopsis
A couple in the country watch in horror as animals dissolve and disappear into thin air. They discover a gnome with a disintegrating rifle to be the cause...
Reprints

The Devil's Prize (Table of Contents: 4)

Genre
horror-suspense
Synopsis
The embezzler John Dirge is committed to an insane asylum as a ruse to escape conviction. When he finds out that his three accomplices plant to keep him there, he enters into a pact with the devil. Being able to slip into other people's bodies, Dirge goes on a deadly revenge spree.
Reprints

Gravestone in splash seems to list the members of the Powell studio:
"Powe...", "...efri", "Epp" and "...ost" - meaning Powell, Seifringer, Epp and Nostrand, of course.