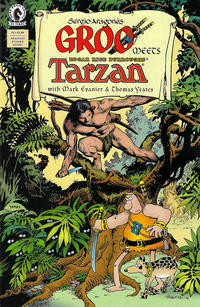 First Line of Dialogue or Text
The team behind the hit Groo the Wanderer series (and this comic!) goes to Comic-Con, finding inspiration not only in their enthusiastic fans but in their fellow creators too -- especially those working on Tarzan comics.
Characters
Groo; Tarzan [Lord Greystoke]
Synopsis
Introduction and credits for the issue. Text prepared by the Dark Horse editorial staff, per Mark Evanier.
Keywords
credits; introduction

Color on inside front cover.

Tarzan's chimpanzee is unnamed in this story.

First Line of Dialogue or Text
...And it's about time!
Feature Logo

Mark Evanier explains that, in the mid-seventies, he wrote and edited comics featuring Tarzan and Korak for the Edgar Rice Burroughs Estate, which were published overseas. He did not write those properties for Gold Key, and that Gaylord DuBois "...between 1947 and 1971 wrote an estimated 95 percent of all the books Dell Comics and Gold Key Comics produced of Edgar Rice Burroughs' greatest hero". Also that, for Gold Key, he (Evanier) wrote mostly "Characters with Tails", citing Bugs Bunny, Daffy Duck, Woody Woodpecker, and Scooby-Doo.

...Also a plot to relieve Sergio Aragonés of his famous moustache, and sell it to a reader for thirty dollars.