[Hanging by a Whisker - or Two] (Table of Contents) 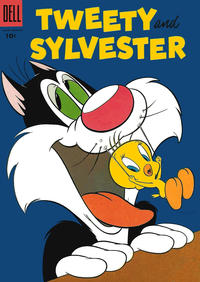 First Line of Dialogue or Text
This cake ought to win a prize at the church social!
Genre
anthropomorphic-funny animals
Characters
Tweety Bird; Sylvester Pussycat; Granny; lots of mice; lots of cats; dog; burglar
Synopsis
Granny threatens to cast lazy Sylvester out because he hasn’t caught any mice. Tweety, observing “Be Kind to Cats Week”, decides to help the Puddy Tat keep his home by providing him with some mice to catch. When hapless Sylvester can’t get the job done, Tweety recruits more cats to help him – followed by a dog to rout the cats, and more.
Reprints
Keywords
best of intentions; catching mice; escalating events; wreaking havoc

The Tweety-Counter (Table of Contents: 4)

Hook or Crook (Table of Contents: 5)

First Line of Dialogue or Text
The best time to nab him is when he's working!
Genre
anthropomorphic-funny animals
Characters
Tweety Bird; Sylvester Pussycat
Synopsis
Sylvester is curious about the project Tweety is working on.
Reprints
Keywords
curiosity; sorry-you-asked

Pantomime. This gag page is presented in an unusually minimalist style for Dell Comics of the period. There is no logo, no title, and no background scenery or props beyond the free-floating door and its attached string. The background of every panel is colored light blue in its entirety, presaging the “modern design” look Western would later institute in its Gold Key Comics of 1962-1963. The rightmost third of the bottom (4th) tier is occupied by the “Dell Comics Pledge to Parents”. Color on back cover.