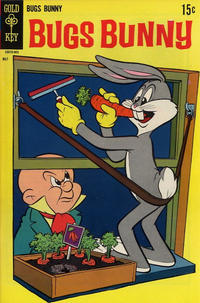 First Line of Dialogue or Text
What are you doing with the comic valentine get-up, Fuddy? Didja lose a bet? Heh! Heh!
Genre
anthropomorphic-funny animals; science fiction; humor
Characters
Bugs Bunny; Elmer Fudd; Porky Pig; Martian Mirror-Man #1; Martian Mirror-Man #2; various other Martian Mirror-Men
Synopsis
Elmer builds a rocket ship in his back yard; but Bugs accidently takes off with it and lands on Mars. He meets the Martian Mirror-Men, who speak in backwards text that can be deciphered with a mirror, and finds they want to conquer Earth.
Reprints
Keywords
carrots; Mars; Martians; outer space setting; rocket ship; space travel

Dialogue and situations are "Maltese-ian"! In the "Looney Tunes Universe", Mars must be a rather diverse planet. First and foremost, there is the animated Marvin the Martian and his "Roman-helmeted kind" (also seemingly co-created by Michael Maltese, as writer for director Chuck Jones), these Martian Mirror-Men, and the "round hairballs with arms and legs" as seen in the "Muffman from Mars" story from Bugs Bunny (Dell, 1952 series) #39 (October-November 1954) by Don R. Christensen and Phil DeLara. However, none of them are a match for Bugs.

[The Telephone Pole Down the Rabbit Hole] (Table of Contents: 3)

Lee Rider in "The Brand Rustlers" (Table of Contents: 6) (Expand) /

First Line of Dialogue or Text
What is the largest room in the world?
Characters
Gold Key Kid
Synopsis
Jokes and riddles submitted by readers.
Keywords
jokes; riddles

The Curiosity Box (Table of Contents: 8)

First Line of Dialogue or Text
"Say, Ollie!" cried Henery Hawk as he spied his friend dashing across the school grounds, a large sheaf of paper clutched in his hand.
Genre
anthropomorphic-funny animals; humor
Characters
Henery Hawk; Ollie Owl; editor
Synopsis
As a reporter for his high school paper, Ollie is assigned to cover the school's basketball game. He so over-researches the history of the game, details on the manufacturing of basketballs, and other ancillary items that he fails to report the outcome of the game.
Reprints
Keywords
basketball; exaggerating one’s importance; high school; newspaper; research

First Line of Dialogue or Text
Eh... what have you got in the box, Doc?
Genre
anthropomorphic-funny animals; humor
Characters
Bugs Bunny; Yosemite Sam; monkey; angry lady; gorilla
Synopsis
Yosemite Sam is all set to go into the organ-grinder business, when Bugs accidently releases Sam's monkey from its box and it runs away. The pair endure the expected slapstick pains while trying to recover the monk, who has climbed up a telephone pole to walk the wires and then retreats to the gorilla's cage at the zoo.
Reprints
Keywords
gorilla; monkey; organ-grinder; series of mishaps; telephone pole

"Reprinted by popular demand". Dialogue and situations are "Maltese-ian"!

First Line of Dialogue or Text
Among Man's earliest records are the prehistoric paintings found on the walls in an ancient cave at Lascaux, France.
Genre
non-fiction
Keywords
cave paintings; educational feature; prehistory