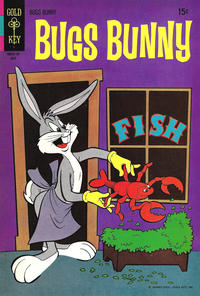 Job Number
B.B. #136-715
First Line of Dialogue or Text
How now...how now...how now, brown cow? Sing it out! Sing it out! Sing it now!
Genre
anthropomorphic-funny animals; humor
Characters
Bugs Bunny; Porky Pig; Cicero; Elmer Fudd; The Wonder Wizard
Synopsis
Porky (on organ), Cicero (on accordion), and Elmer (on a four-string acoustic guitar) have a rock group, and they try out for a man who stages rock festivals, but he is unimpressed. Then Bugs, listening from outside, drops a flowerpot on his own foot and bellows in pain, and the rock festival man loves the sound and says he'll take the group as long as Bugs is on vocals. However, they find that Bugs can't make the sounds without having his toe stomped on, and he wants nothing to do with the group if it requires foot pain. But then Bugs has an idea for a solution involving hypnosis.

Elmer says they're going to be the greatest group since the Insufferwubles.
For their rock group costumes, Elmer wears a fringed poncho over his usual clothing plus what looks like a strand of pearls on top of his hat, Cicero has a large green feather sticking out of his sailor cap and what seems to be a small fringed shawl on his shoulders (along with his sailor jacket and bow tie), and Porky has a Stephen Stills look going with a fringed jacket and cowboy hat (which has a large red feather in some panels and not in others). The rock festival man also wears a fringed jacket.

Monkeying Around (Table of Contents: 2)

First Line of Dialogue or Text
Ah, me, what a cruel fate...shipwrecked on this lonely rock for months!
Genre
anthropomorphic-funny animals
Characters
Tweety Bird; Sylvester Pussycat
Synopsis
Sylvester is stranded on a tiny tropical island--and then Tweety washes up.
Reprints

First Line of Dialogue or Text
What grows larger the more you take away from it?
Genre
humor
Characters
Gold Key Kid

Jokes sent in by readers.

The Fly Fisherman (Table of Contents: 4)

First Line of Dialogue or Text
The sun was just breaking over the horizon as Ollie Owl and Henery Hawk came to a quiet pool up the stream.
Genre
anthropomorphic-funny animals; humor
Characters
Henery Hawk; Ollie Owl
Synopsis
Henery and Ollie go fishing, Henery using worms and Ollie using flies he made himself.
Reprints

The Un-Circus Clown (Table of Contents: 5)

First Line of Dialogue or Text
Ah! The circus twain! Oh, how I'd love to be on it! It would be so wonderful to be a gweat circus performer!
Genre
anthropomorphic-funny animals; humor
Characters
Bugs Bunny; Elmer Fudd; Porky Pig; Petunia Pig; Cicero Pig; Sylvester Pussycat; Gloomy Gooch; Tuffy
Synopsis
Bugs plays a prank on Elmer by making him think he's been invited to join the circus. Meanwhile, the managers of the state heavyweight boxing champion are advised to get him out of his doldrums by making him laugh, and when they head for the circus to recruit a clown they find Elmer standing outside in a clown suit. Misunderstandings ensue.
Reprints