Cover code: 10070-201. First issue of this title to be primarily or fully made up of new stories, after a long series of issues presenting mostly reprint material with only an average of six pages of new content per issue. In the case of this issue, all of the Bugs Bunny comic stories herein are new, with only the cover, a “Beep Beep the Road Runner” four-page “guest feature”, and the issue’s required text story as reprints. For the Bugs Bunny title, reprints predominated from issue #97 (Cover Date: January 1965) until this issue - #140 (Cover Date: January 1972).
This issue has variants:
Keywords
issue of change and firsts

For this reprint, the words “Carrot Juice” were left off the barrel carried by the St. Bernard, which would explain why Bugs was so suitably happy on the original cover – but more so than he ought to be, on this cover reprint. 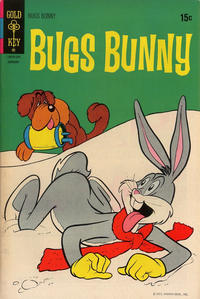 The Dingo Kid Trips a Thief (Table of Contents: 1) (Expand) /

First Line of Dialogue or Text
Ah, there’s a likely prospect for my wares! What better place than a dental office?
Feature Logo

Bugs Bunny [Dell / Western Logo Rounded Letters]
Genre
humor; anthropomorphic-funny animals
Characters
Bugs Bunny; dentist’s receptionist; Elmer Fudd; Dr. Drill (dentist)
Synopsis
Magazine salesman Bugs calls on a dentist’s office to peddle his wares. There he finds a nervous Elmer Fudd waiting in the dentist chair, and dons a white coat and surgical mask simply to heckle and bedevil him! “I know I shouldn’t do this, but I just can’t resist an opportunity to bug that guy!” …Ain’t he a stinker?
Keywords
change in artist’s style; dentist; heckling; imposter; return of writer

This story presents a pair of “firsts". It is the first Bugs Bunny comic book story to be written by animation writer Michael Maltese, after his long and prolific career at Warner Bros. and Hanna-Barbera had wound down. The “heckling attitude” and humorous dialogue was of the type not seen in the Western Publishing Bugs Bunny comics of the time – but was a hallmark of the animation scripts of Maltese, who was one of the creators who literally shaped Bugs Bunny into a cartoon icon.

It is also a first example of artist Phil De Lara, himself a Warner Bros. animation veteran, employing what may best be described as his “DePatie/Freleng style” – presumably developed for drawing Western’s new Pink Panther title (1971) – for a story featuring characters born of classic-era theatrical animation. All characters, other than Bugs and Elmer, are “simplified” and the backgrounds are “minimalist”, compared with De Lara’s work on funny-animal comics up to this point. Dr. Drill, the dentist, actually looks as if he stepped out of a Pink Panther cartoon – protruding big nose, one-eyed side profile and all. De Lara would occasionally work in this new style on characters such as Bugs Bunny, Woody Woodpecker, and others, along with his work on The Pink Panther. Readers can compare this new artistic style of De Lara’s with his more classic style of the reprinted Beep Beep the Road Runner story seen later in this issue.

Guest Who (Table of Contents: 5)

Bugs Bunny
Genre
humor; anthropomorphic-funny animals
Characters
Bugs Bunny; butler; Antone (chef); Count of Fargonia
Synopsis
Bugs receives an invitation to a dinner given in his honor, in the far off country of Fargonia. Once there he finds that he is to be the dinner for the Count of Fargonia, who has never tasted rabbit stew – and would never dine upon an “ordinary rabbit”, but only one like Bugs, whose name and address is in “Who’s Who” under “famous rabbits”.
Keywords
chef; dinner; invitation; one-character-desiring-another-as-a-meal; rabbit stew; royalty

Another first for this issue… the first story published by Western to be drawn by Italian artist Massimo Fecchi, known for drawing European stories of Donald Duck, Uncle Scrooge, Mickey Mouse, and Goofy. For Western, Fecchi worked primarily with Warner Bros. and MGM characters, rather than Disney. He brought a unique visual style to these comics, to the point where the expressive character of Antone the chef, could easily have been an adversary in a Bugs Bunny theatrical short.

Foiled in Oil (Table of Contents: 6)

Keys of Knowledge: The Chimpanzee (Table of Contents: 7)

First Line of Dialogue or Text
Chimpanzee, the most intelligent and advanced of all the animals, is an African ape, which is related to the gorilla family.
Genre
non-fiction; nature
Synopsis
Illustrated text feature on the chimpanzee.
Keywords
chimpanzee; educational feature

Blow Yourself Up (Table of Contents: 8) (Expand) /

The Backward Beeps (Table of Contents: 9)

First Line of Dialogue or Text
Pop, we have an idea! If you don’t think it’s strange! Instead of him chasing us, let’s chase him for a change!
Genre
humor; anthropomorphic-funny animals
Characters
Beep Beep the Road Runner; Beep Beep's three sons; Wile E. Coyote; tunnel construction crew
Synopsis
Beep Beep and the boys turn the tables on Wile E. Coyote, by arranging things so that they wind up chasing him.
Reprints
Keywords
chase; desert setting; one-character-desiring-another-as-a-meal; tunnel; turning the tables

The Abominable Snowman (Table of Contents: 10)

See notes on Massimo Fecchi above.