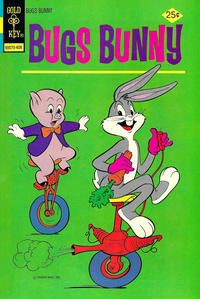 The Hare Brain (Table of Contents: 2)

First Line of Dialogue or Text
They say I can’t even sail the high seas!
Feature Logo

Yosemite Sam is in uncharacteristic (for Western comics) full-pirate mode for this story. Christensen’s original title: “Brain Power Pickle”, from his notes.

Get These Dynamite Embroidered Cloth Patches That Tell It Like It Is! (Table of Contents: 3) (Expand) /

Hey Friend! Which Would You Rather Have… Neat Prizes… Or Extra Spending Money? (Table of Contents: 4) (Expand) /

First Line of Dialogue or Text
One day one of the little Road Runners said, “Pop, I’d really like to go to town… and get a real good look around.”
Genre
anthropomorphic-funny animals; humor
Characters
Beep Beep the Road Runner; Beep Beep's three sons; Bugs Bunny
Synopsis
Beep Beep’s boys want to see the big city. Despite some guidance from Bugs Bunny, they ultimately decide it’s not for them.
Keywords
city life; quest for excitement; there’s-no-place-like-home

Margie Gets Free Gifts for the Whole Family (Table of Contents: 10) (Expand) /

Win Prizes or Get Cash Make Friends Be Happy! (Table of Contents: 14) (Expand) /