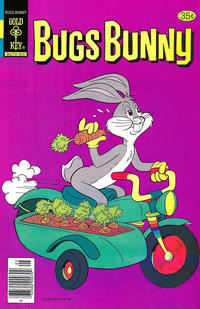 First Line of Dialogue or Text
Yessiree, Bugs! I got this place for peanuts! I’ll make a big profit when I sell it!
Feature Logo

Bugs Bunny [Dell / Western Logo Rounded Letters]
Genre
anthropomorphic-funny animals; humor
Characters
Bugs Bunny; Yosemite Sam; Silly and Solly (Laurel and Hardy-like ghosts); movie producer; Charles Laughton-like ghost; two other ghosts; Elmer Fudd
Synopsis
Sam buys an old house to repair and flip, only to find it occupied by Silly and Solly, two Laurel and Hardy-like ghosts. Bugs and Sam easily rid themselves of the bumbling haunts, but then a horror movie producer shows up wanting to film in the old house and will pay big for some genuine ghosts! However, getting the ghosts to come back is not nearly as easy as having gotten them to leave.
Keywords
ghosts; haunted house; horror movie

The parrot in this story is drawn to look much like Western Publishing’s Golden Magazine mascot “Cracky”. As this story’s penciler Tom McKimson was Western’s art director at the time the character of Cracky was created, perhaps he originally designed, or had a hand in the design of, Cracky – and returned to that character design here.

First Line of Dialogue or Text
Hey! Watch it! Somebody could get hurt!
Feature Logo