Cover code: 90070-002. This is the last issue of the Bugs Bunny title to be published under both the “Gold Key” and “Whitman” brands. All future issues are released only as Whitman through the end of Western's tenure.
This issue has variants:
Keywords
end of brand

[How to Fly a Fish] (Table of Contents) 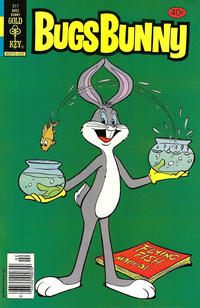 The Flying Houseboat (Table of Contents: 1)

First Line of Dialogue or Text
But why don’t you just figure I’m your pet… and set out my carrots every day?
Feature Logo

Whether the mayor somehow caused Doctor Doolitz’s hair to fall out a la Superboy and Lex Luthor, or if Doolitz is just an ordinary run-of-the-mill resentfully mad scientist, is just as unclear as his vague criminal goals (as stated on page 10, panel 5 upon his apprehension): “I only wanted to conquer SOME of the world!”

King For a Day (Table of Contents: 2)

First Line of Dialogue or Text
(Puff-Puff-Puff!) I’m fed up to the tip top of my ears with this scooter!
Feature Logo

Bugs Bunny [Dell / Western Logo Rounded Letters]
Genre
anthropomorphic-funny animals; humor
Characters
Bugs Bunny; Honest Ernest (used car dealer); royal ministers of Pick; royal guards of Pick
Synopsis
A transporter device in the form of an old used car takes Bugs on an “instantrip” to the rabbit-kingdom of “Pick” where, upon arrival, he is named as king. Bugs gets to enjoy sitting on his throne for exactly one minute, before he is ejected into Pick’s immense carrot field. There, he learns that it is the duty of the King of Pick to "pick" carrots at hard labor, from morning into night, for his subjects. A “duty” strictly enforced by the royal guards. Can Bugs find a way to abdicate the throne, or is he doomed to a life of “royal pain”?
Keywords
car; carrots; hard labor; king; kingdom; rabbits; reused story elements; strange land; throne; transporter

Writer Vic Lockman has used the notion of a transporter device in the form of an old car taking a character on a continent-spanning “instantrip” before. See Donald Duck and Pinocchio “The Go-Go Mobile” – Walt Disney’s Comics and Stories (Western, 1962 Series) #321 (June 1967) – where Donald Duck takes the “instantrip”, in a transporter/car invented by Gyro Gearloose, from Duckburg, USA to the “old country” of Pinocchio and Gepetto, in response to their call for help. Not only is the device in the form of an old car, but the process is also referred to as an “instantrip” in both stories.

The Haunted Castle (Table of Contents: 3)

First Line of Dialogue or Text
Step right up and be thrilled silly in the Haunted Castle!
Feature Logo