Jim Steranko designed the new logo, which was used until October 1982. 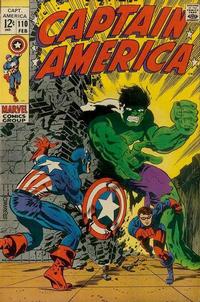 No Longer Alone! (Table of Contents: 1)

First Line of Dialogue or Text
Slowly, falteringly, he walks thru the night...
Genre
superhero
Characters
Captain America [Steve Rogers]; The Hulk [Bruce Banner]; Bucky [Rick Jones]; HYDRA; Madame Hydra (Introduction)
Synopsis
Cap runs across the Hulk on a rampage in NYC. The Hulk escapes and Cap vows Rick must never put himself in danger until the monster can be tamed. Back at Avengers Mansion Rick finds Bucky Barnes' old uniform, and rejects Cap's protests against wearing it. After putting him off for years, Cap finally accepts Rick officially as his new partner. Almost immediately they uncover a plot by HYDRA to contaminate the city's water supply. After a series of battles the HYDRA goons are driven off, and Cap tells Rick he survived his "baptism of fire" like a man.
Reprints

Steranko plot per letter from the artist in Fantastic Fanzine # 12, 1970. Steranko explained: "My Captain America tales were..written by Stan Lee over my plots (the idea of reinstating Rick Jones as another Bucky was Stan's directive"

Cap had first asked Rick to be his partner back in The Avengers #4 (March 1964)but hesitated because he did not want to place a teenager in danger. The sequence in the sewers is strikingly similar to the one in "Spy Ambush" in Captain America Comics #10 (January 1942). The Spirit had also once faced a female villain who planned to poison NYC's water supply in an early story.

Sensational Scoops to Startle, Stun, and Soothe You! (Table of Contents: 2) (Expand) /