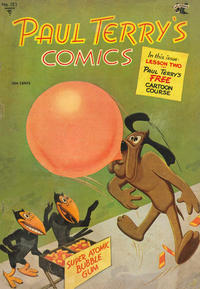 Come on, Buddy, Quit being a BAG-of-BONES Weakling like I was (Table of Contents: 1) (Expand) /

A Close Shave (Table of Contents: 2)

First Line of Dialogue or Text
A black sedan races at breakneck speed along the waterfront of Terrytown, as The Claw and his gang make a desperate attempt to elude the police.
Feature Logo

Mighty Mouse [St. John Logo without Character]
Genre
anthropomorphic-funny animals; superhero
Characters
Mighty Mouse; The Claw; Terrytown police (mice); citizens of Terrytown (mice); three cat-henchmen in getaway car; Mitzi Mouse; Professor Limburger
Synopsis
Pursued by the Terrytown police, a getaway car containing The Claw and three hench-cats careens off a waterfront pier and into the river. Mighty Mouse finds only the wrecked auto and no cats – who have either eluded capture, or are presumed dead. When a docked ship releases its cargo of Egyptian mummies bound for a museum, the Claw gang takes the place of the mummies.
Reprints
Keywords
car chase; mummies; police; waterfront

The 2nd page follows the next story. The first three paragraphs of this two-page text story nicely recap the current (at the time) Mighty Mouse comic book continuity, telling of the industrious and prosperous community of Terrytown mice, the recurring menace of The Claw and his gang, and the equally recurring heroics of Mighty Mouse.

Page two of the Mighty Mouse text story appears after this story.

First Line of Dialogue or Text
Everyone should try whatever he can do best!
Feature Logo

Dinky [Duck] [St. John logo without character]
Genre
anthropomorphic-funny animals
Characters
Dinky Duck, Rudy Rooster; farmer; hens; baby chicks; pig; mule
Synopsis
It’s “Help Around the Barnyard Week”, and everyone does their part. That is, everyone except poor Dinky, who fails at everything he tries, until four baby chicks need rescuing by someone who can “swim like a duck”.
Reprints
Keywords
barnyard; farm; pitching-in; unlikely hero

The House Wreckers (Table of Contents: 9)

I'm "Uncle" Harry I Will Send You Prizes Like These Without One Cent of Cost (Table of Contents: 11) (Expand) /