Second St. John issue of this title after 59 issues from Timely/Marvel.

No ads in this issue. All 36 pages are comics or comics-related text material.

[Taking a Little Off the Top] (Table of Contents) 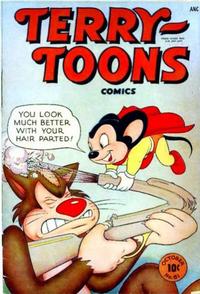 This is an expanded text adaptation of the 1947 Mighty Mouse theatrical cartoon "Lazy Little Beaver" - though, oddly, excluding Mighty Mouse, and having a wolf as the villainous furrier. Without Mighty Mouse to "save the day" in this text version, Benny must rely on his wits to escape the felonious fox furriers.

The Flying Disc (Table of Contents: 2)

First Line of Dialogue or Text
I'm going now, Professor. Are you sure you'll be all right alone?
Feature Logo

A tall (for a mouse), lanky, bearded mouse character, referred to only as "The Professor", appears in this story. This would seem to be the prototype for the later, recurring mouse scientist Professor Edam. The Claw's fur is colored brown, rather than its usual gray.

Lunch for Bunny (Table of Contents: 3)

First Line of Dialogue or Text
I say old bean, it looks like that bunny is in a bit of trouble.
Feature Logo

Adventure in Arabia (Table of Contents: 4)

First Line of Dialogue or Text
Far away, in an ancient mystic land, the cruel leader of an outlaw gang, prepares to attack a peaceful little city.
Feature Logo

Mighty Mouse [St. John Logo without Character]
Genre
anthropomorphic-funny animals; superhero
Characters
Mighty Mouse; The Great One (Arab-cat bandit leader); goony-eyed Arab-cat sorcerer; various Arab-cat bandits; Arab-mouse sultan; various Arab-mouse citizens and soldiers; Mitzi Mouse
Synopsis
The Great One, leader of a tribe of Arab-cat bandits, overruns a peaceful Arab-mouse city, collecting all the mice for a sumptuous celebratory meal. Before the celebration can begin, The Great One commands his goony-eyed sorcerer to deliver to him the most delectable, tender young mouse of all, which he will consume to mark his victory. The sorcerer's crystal ball reveals Mitzi, far away in Terrytown, to be that prized mouse - but not if Mighty Mouse has anything to say about it.
Keywords
bandits; cats; crystal ball; desert setting; far-off land; flying carpet; heroics; hypnotism; magic; mice; Middle East; notable coloring modification; one-character-desiring-another-as-a-meal; sorcerer; walled city

First Line of Dialogue or Text
A toast to our departing friend!
Feature Logo

Dinky is colored gray (as he occasionally is), as opposed to his usual black. He is also uncharacteristically cast as a duck-in-the-wild that can be hunted, vs. his usual situation as a barnyard duck.

The Secondhand Taxi (Table of Contents: 6)

"De Soako" is a parody reference to the then-famous "DeSoto" automobile brand of the Chrysler Corporation. https://en.wikipedia.org/wiki/DeSoto_(automobile)

Color story on back cover. Gandy brags of his defensive strategy "In this position even Joe Louis couldn't hurt me!" Sourpuss saves Joe Louis the trouble.