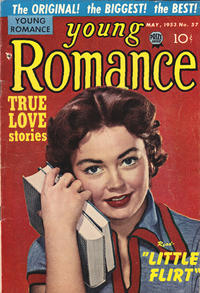 The Underdog (Table of Contents: 1)

Genre
romance
Characters
Lt. Neil Costaine; Ilse; Marty Baker; Helen Woodson
Synopsis
American officer Neil is on occupation duty in Germany. He thinks he’s fallen in love with his housekeeper Ilse, but is engaged to Helen in the USA. Helen arrives for a visit and urges him to fire Ilse to avoid gossip about “fraulein sweethearts.” Neil says he’s going to marry Ilse and Helen warns him that a couple must have love and mutual respect. Neil proposes to Ilse and she agrees to marry him but he knows it’s only out of gratitude and the chance for a better life in America. Neil asks Helen to take him back, and she does.
Reprints
Keywords
Germany

The protagonist, who narrates, introduces himself as "Lt. Nick Costaine" on page 1, but by page 2 he is "Neil" and remains that way.

First Line of Dialogue or Text
The letter I've chosen to discuss this month is from a girl...
Genre
romance
Characters
Nancy Hale; Muriel
Synopsis
Muriel is “a tall, tall girl” and writes to Nancy Hale saying she is “forced to go with the man whose height is right, rather than the man who appeals to me,” and that being very tall limits her fashion options. Nancy says “Make your own rules...a tall girl can be lovely and feminine as any woman—but, above all, go after the boy of your choice!”

The Extra Touch (Table of Contents: 3)

Genre
romance
Characters
Al Browne; Kim Conner; Mr. Anderson; Marion
Synopsis
Marion makes friends with her neighbor Al, but she is dating co-worker Kim. However, Kim is treated like an accessory, always trying to make a good impression on potential business contacts. Al rescues Marion from a fire in their apartment building and they admit their love for each other.

Genre
non-fiction; historical
Characters
Lillinona; Waramaug
Synopsis
The story of the Lover's Leap waterfall in Connecticut, named for the Native and white lovers who went over the falls to their deaths after being forbidden to marry.

Genre
romance
Characters
Marcy; Tom; Dave; Lee; Elsa
Synopsis
Marcy considers her vacation romance with Tom just a flirtation, but he says he wants to marry her. Tom breaks up with his girlfriend and follows Marcy back to the city where he stalks her, scaring off her other boyfriends: “You’ll love me...or no one!” When Marcy sees Tom in a restaurant with another woman, she discovers she is jealous. The other woman is Tom’s sister and advises Marcy to admit she loves Tom. Tom and Marcy clinch.