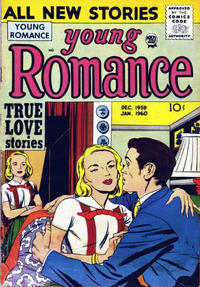 Scheduled for Heartbreak (Table of Contents: 1)

Genre
romance
Characters
Martha; Clara; Martha's father; Jack Marvin
Synopsis
Martha's widowed father marries widow Clara, who arrives with her grown son Jack. Jack and Martha become friends and then fall in love, despite Clara's attempts to keep them apart. When the two young people announce their intention to elope, Clara explains: Jack has a hereditary disease that killed his father, and may have only a few years to live himself. Martha and Jack don't care: "at least we'll be together!"

The Man for Me (Table of Contents: 2)

Genre
romance
Characters
Frances; Joan; Wally Davis; Mel; Marcia
Synopsis
Frances falls in love with Wally, although he's not handsome at all. Marcia and her other friends mock her and Wally suspects something is wrong, so he leaves her. Frances hears Wally's been calling on Marcia: Marcia says Wally's a nice guy and she's ashamed of her actions. If Frances doesn't make up with Wally, Marcia may step in herself. Wally and Frances reconcile and will wed.

Same story premise (including some of the same situations and dialogue) as: “Beauty Loves the Beast!” in Young Romance 7/11 (#71) July 1954.

Genre
romance
Characters
Anita Cordiss; Betty Barstow; Bob Barstow
Synopsis
Anita, a talented athlete, broke up with Bob because "I just can't respect any man I can beat at sports...much less love him!" Bob won't give up and Anita is ambivalent: she agrees to marry him if he can beat her in any sport. He chooses badminton. The match is close and Anita loses, but was it on purpose? It doesn't matter, they will get married.

Genre
romance
Characters
Sally Long; Dick Jeffries; Bobby Rogers; Meg Morley; Mr. Rogers
Synopsis
Bobby is angry when his girlfriend Sally ditches him on the dance floor for Dick, an expert dancer. Bobby takes dance lessons from Miss Morley but it takes so long that Sally goes out with Dick. Bobby is invited to a dance by Miss Morley and thinks she's hot for him, but she advises him to stick to his own age group and "corral your filly!" Bobby explains everything to Sally and she says it was sweet of him to spend his time and money and he won't have to worry about other men any more.

Choose Your Man (Table of Contents: 6)

Liars in Love (Table of Contents: 7)

Genre
romance
Characters
Howard Parker; Mona Morrison [as Mona Smith]
Synopsis
Howard romances Mona on vacation, thinking she's rich. They fall in love and she admits she's not who he thinks she is; he confesses he's poor and was looking for a rich wife, but it doesn't matter now. The next day, Mona informs Howard that she actually is rich, but wanted a man who loved her for herself. So they each get what they wanted.

The plot is confusing. Howard apparently chooses Mona in the first place because he thinks she's rich, but on the second page of the story he says "Baby, you can't be a typist!" which implies he thinks she works in an office. Then on page three he thinks Mona is "bona-fide rich."