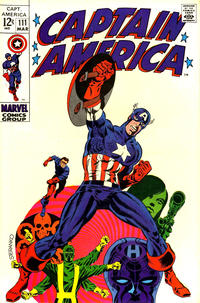 Tomorrow You Live, Tonight I Die! (Table of Contents: 1)

Genre
superhero
Characters
Captain America [Steve Rogers]; HYDRA; Madame Hydra; Rick Jones; Man-Killer (HYDRA robot)
Synopsis
Cap is ambushed by HYDRA assassins at the command of Madame Hydra. The mission fails and later Rick Jones joins Cap in a training session. Alone, Rick picks up a message meant for Cap that causes him to hallucinate. Abducted by Hydra Cap searches for Rick and is attacked by a Hydra robot. Rick escapes & tries to warn Cap, who realizes he could make a good partner. Cap appears to leap from a rooftop into the river through a barrage of HYDRA gunfire. The police only find his costume and a mask with the facial features of Steve Rogers, suggesting "Rogers" was a fake identity.
Reprints

Part 2 of 3. Page 9 contains Steranko's 2nd tribute to Salvador Dali (following the cover of NICK FURY #7). The "Spectro-Ray", which reveals no hidden weapons on Rick, is strikingly similar to the effect used by Infinata in the 1968 ROCKET ROBIN HOOD cartoon "Revolt In The Fifth Dimension" (and its 1969 SPIDER-MAN cartoon remake). One of the kidnappers on page 11 bears a striking resemblance to Stan Lee!