This cover was worked on by numerous hands. Smith penciled the bulk of the cover; Colan penciled the Daredevil figure and Romita redrew/altered the robot. 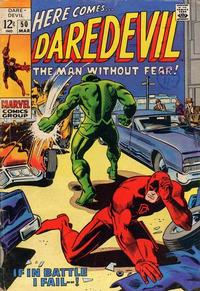 Genre
superhero
Characters
Daredevil [Matt Murdock]; Foggy Nelson; Karen Page; Biggie Benson (villain); Starr Saxon (villain); Plastoid (villain)
Synopsis
The Plastoid and DD duke it out until the giant robot is hurt and returns to his master. In the heat of battle with Hornhead, Starr accidentally sends the robot off to kill the man who hired him, Biggie Benson.
Reprints

Per Nick Caputo, John Romita provided alterations on a number of faces and figures throughout the story. Script credit corrected by Haydn via the GCD Error Tracker; we formerly credited Roy Thomas.

Statement of Ownership for October 1, 1968. Average paid circulation for previous 12 months was 292,423. Printed sideways above the house ad for Captain America.