The story-arc, "Within this Tortured Land," starting here and running through issue #87, is widely known to have been inspired by the British TV series THE PRISONER. Kirby was a fan of the show and based the plot on key elements of The Prisoner, as documented in Comic Book Resources (https://www.cbr.com/the-100-greatest-stan-lee-stories-ever-told-35-31/2/) and The Jack Kirby Collector #11 (https://twomorrows.com/kirby/articles/11prisoner.html).
Keywords
The Prisoner

The Name Is -- Doom! (Table of Contents) 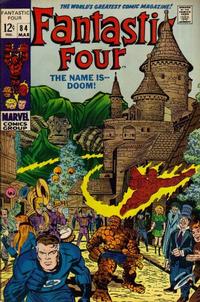 The Name Is Doom! (Table of Contents: 2)

Secrets of Teaching Yourself Music (Table of Contents: 3) (Expand) /

Magic World of Surprises and Mystery (Table of Contents: 13) (Expand) /

Includes two panels reprinted from an earlier issue and Know Ye These, the Hallowed Ranks of Marveldom.