Where Fall the Shifting Sands! (Table of Contents) 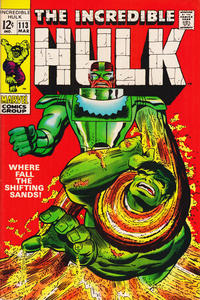 Where Fall the Shifting Sands? (Table of Contents: 1)

Genre
superhero
Characters
Hulk [Bruce Banner]; Thunderbolt Ross; Betty Ross; Sandman (villain); Triton (cameo flashback); Blastaar (cameo flashback); Fantastic Four [Invisible Girl; Mr. Fantastic; The Thing; Human Torch [Johnny Storm]] (cameo flashback)
Synopsis
Bruce Banner, dying on a decompressed rocket ship hurling back to earth, succeeds in turning back to the Hulk and surviving the experience. Once he makes it back to earth, he is accosted by Sandman who easily dupes the Hulk into believing he is his only friend in the world. On his new buddy's instructions, Hulk attacks Ross's missile base as the Sandman uses the diversion to try and steal some military hardware. Finally figuring out that he has been hornswaggled, Hulk beats up Sandman but then leaps away before Ross and Betty can tell him they may think he is not that bad a guy after all.
Reprints
Keywords
Negative Zone

Betty Ross is referred to as Betty Brant.

First Line of Dialogue or Text
Dear Stan and Herb, I write this letter for the sole purpose of pointing out a mistake --