On sale date as listed in the Catalog of Copyright Entries, Periodicals, 1969, page 254, registration number B506313. 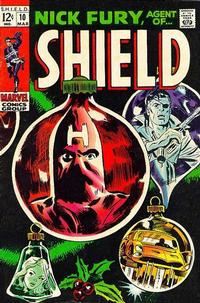 Twas the Night Before Christmas (Table of Contents: 1)

Genre
spy
Characters
Nick Fury; Dolly; Harv; Luke; Laura Brown; Jasper Sitwell; Hate-Monger [unknown]
Synopsis
Fury heads home to his apartment and is surprised by Laura Brown, who tells him that she thought it would be nice to spend Christmas together. Their celebrations are interrupted by a transmission from The Hate-Monger, who plans to drop a "Germ Bomb" to wipe out the entire population of NYC and as a result, will turn the world leaders against each other, resulting in a nuclear holocaust that will purge Earth of all living beings. But thanks to a mysterious unidentified object, Fury manages to make it home in time to finish celebrating with Laura.
Reprints

Smith pencils on page 2, panels 2-4; page 3 and page 4, panels 1-3. Smith pencil credits from Michel Faber, April 2009. The fact that this action sequence has no relevance to the rest of the story suggests that it was originally produced for a different Nick Fury story that was rejected or not completed. Izzo and Kuramoto lettering on Barry Smith penciled pages. info per Nick Caputo, August 2012.


Jasper Sitwell last seen in a SHIELD episode in STRANGE TALES #159 (August 1967). Self-Orbiting Attack Craft last seen in NICK FURY, AGENT OF SHIELD #2 (July 1968). Third time Hate-Monger appears in this story; it's clearly not Adolph Hitler this time, as he has no moustache. Hate-Monger's scheme of germ-induced mass murder, provoking a nuclear war and a new population riding out the holocaust aboard a space station was mirrored to varying degrees in the plots of the 007 films THE SPY WHO LOVED ME (1977) and MOONRAKER (1979).