First Line of Dialogue or Text
This is station XYZ-TV, now signing off!
Genre
humor
Characters
Archie Andrews; Veronica Lodge
Synopsis
A gorilla reaches through the television screen and turns off the television at the end of the broadcast day.

This occurred back in the days when television stations didn't broadcast twenty-four hours a day. 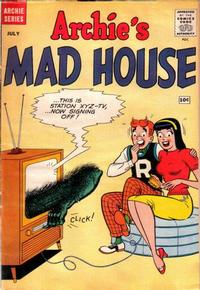 A Joke's Progress (Table of Contents: 1)

Genre
humor
Characters
Betty Cooper; Reggie Mantle
Synopsis
Reggie and Betty watch from the pier as Archie raises different flags on the Lodge yacht to signify who is on board with him.

Samm Schwartz background gag: in panel one, page two, a man is fishing on the pier; in panel three, he's pulled into the water by his catch; in panel five, he's in the background, wrestling with a baby whale.

A Place in the Sun (Table of Contents: 4)

Genre
humor
Characters
Jughead Jones
Synopsis
Unable to get a tan in wintertime, Jughead paints a picture of the sun, then lays under it.

A Madhouse Collection of Auto Fashions (Table of Contents: 9)

Genre
satire-parody
Characters
Jughead Jones (host); Archie Andrews
Synopsis
Photos of President Eisenhower golfing, John Kennedy's inauguration, the Riverdale High prom and other events, with a face in the crowd cut out to allow the reader to insert his or her own picture and pretend they're famous.

If Teen Agers Ran the Airlines! (Table of Contents: 12)

Credits from the reprint in World of Archie Double Digest (Archie, 2011 series) #33.

The Discovery of the Earth (Table of Contents: 14)

Genre
satire-parody
Characters
Mr. Weatherbee (host)
Synopsis
How cavemen discovered where they were.

It's Just Your Imagination (Table of Contents: 16)

Inside back cover. Previously credited to Joe Edwards.