First Line of Dialogue or Text
What did you say the name of this planet was?
Genre
humor; science fiction
Keywords
eight-ball; rocket 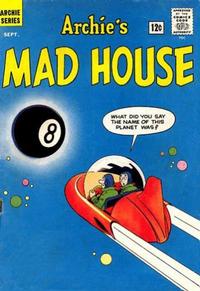 The Only Magazine with a Split (3-Ways) Personality (Table of Contents: 1)

Lester the Hipster (Table of Contents: 4)

Reference to Chubby Checker and the Twist. Credits from World of Archie Double Digest #16 reprint.

First Line of Dialogue or Text
Whether you like to do your space traveling in a rocket...
Genre
humor; science fiction
Characters
The Pink Martian
Reprints
Keywords
flying saucer

The Thought Machine (Table of Contents: 7)

Genre
humor; science fiction
Synopsis
A professor entertains space travelers with a thought machine that converts energy into matter. The thought machine was invented long ago and the population eventually became so bored that it lost its will to live. The professor is the last one on the planet and when he gets bored his thought items disappear, leading to a twist ending.
Reprints
Keywords
3-D television; boredom; pizza; thought machine

The character is called Professor Klops everywhere except in the title logo. The Professor is a cyclops with one eye.

Genre
humor
Characters
Hilda the Witch (host); Son of Dr. Jerkyll
Synopsis
The son of Dr. Jerkyll continues his father's experiments and turns into rock star Melvin Preston. After a close escape with autograph hunters, he decides to change his features to Eliot Mess, the FBI agent. That doesn't work either, because gangs target him. He tries an antidote, but forgets to dilute it and ends up in an even worse predicament.
Reprints
Keywords
autograph hunters; gangs; machine guns; potions; rock star

Genre
humor
Characters
Hilda the Witch
Synopsis
When readers claim Hilda is a fake, she changes herself into part of the comic book itself.
Keywords
comic book; magic

Inside back cover; fourth wall; magic