First Line of Dialogue or Text
See? I told you the monster had more than one heart!
Genre
humor
Keywords
monster; playing cards; x-ray 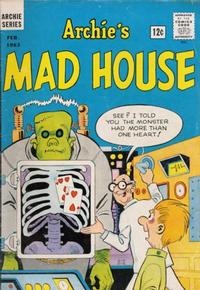 Inside front cover. Statue in background is similar style (but not identical) to the National Cartoonists Society Rueben Award.

The Law of Attraction (Table of Contents: 4)

Genre
humor; science fiction
Characters
The Pink Martian (host); Zena; Exena
Synopsis
Two girls from Pluto come to Earth to check out the boys. But their forward manner scares the boys off. They ask Earth girls the secret of their power over the boys.
Reprints
Keywords
dates; flying saucer; movie theater; Pluto

Introduction to rest of section.

Script and ink credits from the reprint in Sabrina the Teenage Witch Complete Collection (Archie, 2017 series) #1.

Sabrina attends Baxter High. Della smokes a cigarette in a holder and the coach smokes a pipe at the game.

Monsters in the News (Table of Contents: 7)

The Time of Your Life Machine (Table of Contents: 13)

First Line of Dialogue or Text
The time you went to a party where you didn't know anyone.
Genre
humor; teen
Synopsis
Four cartoons exaggerating social situations including going to parties where you don't know anyone, eating pizza, dating younger men, and inviting food-lovers to a party.
Keywords
dating; party; pizza