First Line of Dialogue or Text
I carry it around to let the boys know how I look back on earth!
Genre
humor; science fiction
Synopsis
A female astronaut carries around a pin-up poster of herself so everyone knows she has a figure under her spacesuit.
Keywords
Moon; spacesuits 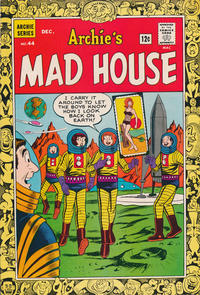 Genre
humor
Synopsis
Safety advice is dispensed on how to read Mad House without injuring yourself from laughter. Plus this month's features are listed.

First Line of Dialogue or Text
How to tell a cowboy good guy from a cowboy bad guy!
Genre
humor
Characters
Captain Sprocket; The Sheriff; The Outlaw
Synopsis
The differences between heroes and villains are outlined.
Keywords
marbles

A parody of the James Bond films. Caricatures of Sean Connery and Bernard Lee. Art on first two pages looks different one than the rest of the story, suggesting that Jones might have had help on the last pages.

The Last Word (Table of Contents: 4)

The art for this story features numerous swipes from Wally Wood's EC classic "Superduperman". It also features caricatures of actors Sean Connery, Gert Frobe and Robert Vaughan in bit parts, as well as comic strip characters Dick Tracy, The Mole and Rip Kirby. The artist, Russ Jones, also did at least the first two pages of Agent 00 7/10 in this issue.

Genre
humor
Synopsis
In a modern art gallery, a man pounds a nail into the wall, then frames it.
Keywords
frame; modern art; nail

I Dated a Monster (Table of Contents: 14)

A parody of romance comics. The girl talks to the readers in the final panel.

Genre
humor
Synopsis
A race of mole men from beneath the Earth have their surface invasion thwarted.
Reprints
Keywords
mole men; sun