First Line of Dialogue or Text
If your Telstar doesn't stop sending those awful TV commercials to our planet it could mean war!
Genre
humor 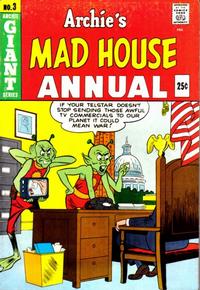 Introduction to rest of section. Inside front cover.

Genre
humor; fantasy-supernatural; teen
Characters
Sabrina; Salem; Della; Archie Andrews (cameo); Betty Cooper (cameo)
Synopsis
Meet Sabrina, a sexy teen witch who lives a typical teen-age life -- except that her job is to hex her fellow teens. She introduces us to the rules of witchery: witches can't cry, can't sink when they're in the water, and if they ever fall in love, they lose their powers.
Reprints

First appearance of Sabrina, her cat Salem, and Della the Head Witch.

In the COMICS v10 #5 G. Gladir states that Sabrina was named after a woman he remembered from his teens who he later found out was actually named Sabra not Sabrina. He also states that he wrote all Sabrina and Hilda stories until Sabrina went to Saturday morning animation in 1969.

Genre
humor; fantasy-supernatural; teen
Characters
Starchie [Archie Andrews] (cameo)
Synopsis
An advertisement for methods that monsters can use to scare each other.
Reprints

Genre
humor; fantasy-supernatural; teen
Characters
Hilda the Witch (host); Art Tick; Abe Ominable; Dagmar
Synopsis
A living snowman gets the cold shoulder from all the other teens until he falls in love with a warm-blooded girl.
Reprints

Go for Laughs and Adventures (Table of Contents: 6) (Expand) /

Sabrina attends Baxter High. Della smokes a cigarette in a holder and the coach smokes a pipe at the game.

First Line of Dialogue or Text
Whether you like to do your space traveling in a rocket...
Genre
humor; science fiction
Characters
The Pink Martian
Reprints
Keywords
flying saucer

Have Typewriter Will Travel! (Table of Contents: 12)

Genre
humor; science fiction
Characters
Bob Weber; Zexo
Synopsis
Bob Weber would give anything to be a successful science fiction writer, and he gets his wish when an alien from Venus drops by his house.
Reprints

The Thought Machine (Table of Contents: 14)

Genre
humor; science fiction
Synopsis
A professor entertains space travelers with a thought machine that converts energy into matter. The thought machine was invented long ago and the population eventually became so bored that it lost its will to live. The professor is the last one on the planet and when he gets bored his thought items disappear, leading to a twist ending.
Reprints
Keywords
3-D television; boredom; pizza; thought machine

The Law of Attraction (Table of Contents: 16)

Genre
humor; science fiction
Characters
The Pink Martian (host); Zena; Exena
Synopsis
Two girls from Pluto come to Earth to check out the boys. But their forward manner scares the boys off. They ask Earth girls the secret of their power over the boys.
Reprints
Keywords
dates; flying saucer; movie theater; Pluto

Bombs Away (Table of Contents: 17)

The Time of Your Life Machine (Table of Contents: 19)

Boys Are Such Funny Creatures! (Table of Contents: 20)

Part one of three related sequences.

Girls Are So Illogical! (Table of Contents: 21)

First Line of Dialogue or Text
And believe me - We teachers often have trouble trying to figure out both boys and girls!!
Genre
humor; teen
Synopsis
Teachers complain about both teen boys and girls.
Reprints
Keywords
essays; foreign language; letters; slang; typewriter

The Romances of Marcia the Mermaid (Table of Contents: 24)

The Giant of Them All Is Still the Greatest Buy in Comics! (Table of Contents: 28) (Expand) /