Original indexer credited Neal Adams on pencils but Nick Caputo believes Adams only redrew the Supergirl figure and the rest of the cover is Cardy pencils and inks. 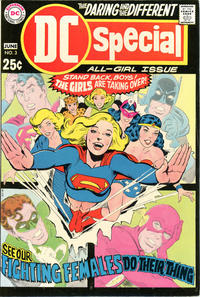 A previously unpublished story, written and drawn in the 1940s.
Script credit from The Secret History of Wonder Woman by Jill Lepore (Alfred A. Knopf, 2014).

The Maid of Menace! (Table of Contents: 4)

Genre
superhero
Characters
Black Canary [Dinah Drake]; Larry Lance; J.J. Marvin (villain, death); Nifty (villain); Bobo (villain)
Synopsis
Larry is called in to the offices of J.J. Marvin and handed an envelope, contents unknown. If he will meet Marvin at 5pm in his office, Lance will be given $1000 cash. However, Marvin is murdered right afterwards, and when the Canary rounds up the true killers, Larry is blamed for the murder by the Police.
Reprints

Previously unpublished. Script, pencils, and inks credits from the reprint in Black Canary Archives.
Tom Orzechowski believes the lettering is by Gaspar Saladino.

Girl in the Golden Flower! (Table of Contents: 6)

Genre
science fiction
Characters
Flora
Synopsis
An alien spore takes root in Brad Mulford's windowbox, blooming into a peculiar flower. Soon after he begins to have strange dreams of a girl who takes him on various alien travels, but when the flower eventually dies, so does the girl in the dreams.
Reprints

Script credit verified via Julius Schwartz's records. Story page credits a "Robert Starr" which was a pseudonym Julius Schwartz used to make it look like he had more writers. (Bob Hughes via email.)

Defend Yourself! with Ketsugo (Table of Contents: 9) (Expand) /

The Secret Life of Star Sapphire! (Table of Contents: 11)

Illustration is a panel from the Sargon story in Sensation Comics (DC, 1942 series) #57, which is signed by Joe Kubert.