Information for this index from Ger Apeldoorn via the GCD Error Tracker. 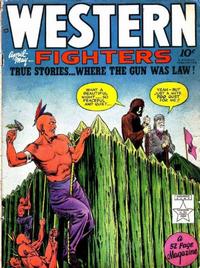 The Hat-Knocker (Table of Contents: 4)

The Road Agents (Table of Contents: 6)

Identification of "Katz" in some doubt. The original indexer assumed the penciler was Jack Katz, and the signature does bear some resemblance to other known Jack Katz signatures. Stephen Ittner, however, suggested the penciler was actually Gil Kane (signing with his actual family name) and Gene Reed agreed with that identification based on the hands and postures of the characters.

Ger Apeldoorn says: "looks like Bernie krigstein (unsigned), buried beneath some inking, but the
figures and poses are unmistakable, not often mentioned (maybe never)."