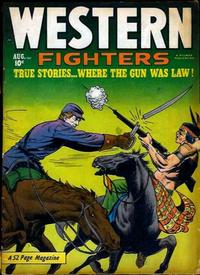 A Good Man to Have Around (Table of Contents: 2)

Genre
western-frontier
Characters
Buckskin Benson [Rusty Benson]; Captain Trumbull; Lieutenant Carter
Synopsis
Benson and the captain are not getting along very well when riding with a troop of cavalry through Indian territory.

This is Prentice's work by the look of faces, hands and horses.

Genre
western-frontier
Characters
Nine Eyes Wilson; Colonel Plug; Jake; Matt
Synopsis
Not all highwaymen worked on the roads; some of the busiest were river pirates whose hangouts were caves along streams like the Ohio River.

This artwork matches Dressler's Classics Illustrated story Master of Ballantrae. Penlines, ears and faces, and lack of action are marks of Dressler.

Genre
western-frontier
Characters
Roy Stewart; Cole Younger
Synopsis
After killing a defenseless mail clerk, the Younger Brothers go after the reporter who wrote about it.
Reprints

The artwork has similarities to some work by Torbert in The Perfect Crime (Cross, 1949 series) #20.

One page comic strip about schools and education.

The Battle of the Woolies (Table of Contents: 7)

Son of the Shotgun (Table of Contents: 9)

Genre
western-frontier
Characters
Morgan Ames (stage guard); Tom Ames; Sheriff
Synopsis
The shotgun rider had a son who liked to fool around with outlaws, a thing which worried the old stage guard.