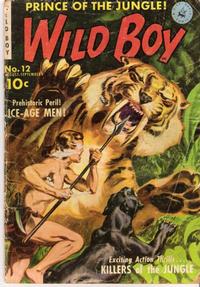 Artwork is very similar to other fillers in same series credited by JVJ, and Andru is also credited to "Wild Boy" by Jerry Bails' Who's Who.

The Killers of the Jungle (Table of Contents: 2)

Genre
jungle
Characters
Wild Boy; Keeto (friend); Tumar (king of the apes)
Synopsis
Keeto and Tumar, king of the apes are captured by pygmies to be sacrificed.
Reprints

How to Survive in the Jungle (Table of Contents: 3)

Genre
jungle
Synopsis
"Lost in the jungle...no food...no equipment...no weapons! What would you do? Here's the advice of an experienced guide..."
Reprints

Originally credited to Gerald McCann, but his art is much darker in inking and old faces with long noses and small chin. McCann had some "Wild Boy" stories, but not this one. Prentice is credited to "Wild Boy" by Jerry Bails' Who's Who.

A Friend in Need (Table of Contents: 5)

Genre
jungle
Characters
Joe Barton; Major Viseemon (High Commissioner); Brute Bronson
Synopsis
Brute Bronson is shipped out of Africa by the Commissioner, but he swears he will be back.
Reprints

Irv Novick and Bernard Sachs are both credited to "Joe Barton" by Jerry Bails' Who's Who, and the faces with lightning eyebrows are like Novick's work. The inking by Sachs match his credited work in "Mystery in Space" #3.

Genre
jungle
Characters
Wild Boy; Chief M'Bana; Pierre Latour (villain)
Synopsis
Latour has a mad desire to escape with a fortune in precious gems, but he did not reckon with Wild Boy.
Reprints