The Winged Gods of Walla-Habi (Table of Contents) 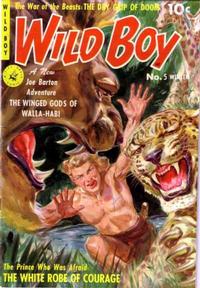 The Mountains of the Moon (Table of Contents: 1)

Andru is credited to most of the fillers by JVJ at Digital Comics Museum, and this might also be one of them.

The Dry Grip of Doom (Table of Contents: 2)

Jim Vadebonceur has Kramer as best guess on similar artwork in #6.

The White Robe of Courage (Table of Contents: 3)

McCann's old faces with long noses and small chin are easy to spot as are the pointed heads and the lack of action.

The Most Dangerous Cow (Table of Contents: 4)

The Greatest Railroad Show on Earth (Table of Contents: 5) (Expand) /

The Winged Gods of Walla-Habi (Table of Contents: 6)

The faces in close up looking backwards, with lightning eyebrows are like Novick's work.

The Coming of Daro (Table of Contents: 8)

Same art as on the first story by a probable Kramer.

Originally credited as a possible Mike Becker; but Jim Vadeboncoeur Jr at Digital Comics Museum seems certain of Andru on most of these fillers.

The Pachyderms (Table of Contents: 11)

Drawing of Dario on back cover.