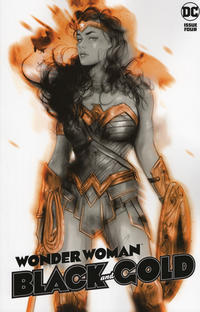 Inside front cover with issue credits and an illustration from the Tula Lotay cover of this issue.

Genre
superhero
Characters
Wonder Woman [Diana of Themyscira]; a griffin; Artemis (as a deer)
Synopsis
Diana mourns the loss of a mythical creature.

Genre
superhero
Characters
Wonder Woman [Diana of Themyscira]; Giganta; Lucy; Lucy's brother; Lucy's mother
Synopsis
A young girl who likes to pretend she is Batman is amazed when she and her brother witness Wonder Woman battling Giganta, causing her to change the hero whom she worships.

Whatever Happened to Cathy Perkins? (Table of Contents: 4)

Genre
superhero
Characters
Wonder Woman [Diana Prince]; Cathy Perkins; Them! [Top Hat; Moose Momma; Pinto]
Synopsis
Diana encounters Cathy Perkins, a woman from her past who causes time to reverse itself back to when Diana had lost her powers and was running a mod boutique, and Diana and Cathy are threatened by old enemies.
Keywords
Mod-ly Modern Boutique

Genre
superhero
Characters
Wonder Woman [Diana]; Theresa; Hypnota
Synopsis
Wonder Woman gets involved when her friend is hypnotized into joining a cult of love by an alien being.

Inside back cover with indicia and publisher information. Includes details of the creative teams for the next issue, with an illustration from the cover of the next issue.

Back cover with a listing of the writers and artists who contributed to this issue, includes an illustration from the first story in this issue.