On sale date as listed in the Catalog of Copyright Entries, Periodicals, 1969, page 254, registration number B506307.

Springer's signature is barely visible on the upper left corner, next to the Marvel Comics Group logo. Per the original art published in Comic Book Artist # 13, May 2001, Springer's Nick Fury's face was redrawn by Barry Windsor-Smith. 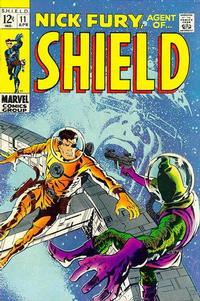 Genre
spy; superhero
Characters
Nick Fury; Laura Brown; Rick Jefferson; David Kies; Flowers Barton; Jake Cooley; Hate-Monger [unknown]; Dum Dum Dugan; Jimmy Woo; Gabe Jones; Ed Sullivan; President Lyndon B. Johnson
Synopsis
The Hate-Monger uses his ray to begin a riot setting young against old. The hate rays continue to pour forth, and gangs of youths seize power in New York and at an ICBM base in New Jersey. Conferring with the President, Fury asks for a space capsule at Cape Kennedy so he can knock out the Hate-Monger's threat. Fury invades the orbiting space station and confronts the Nazi villain. After a quick battle the Hate-Monger, trying to escape, accidentally steps out of the escape hatch and apparently dies in airless space.
Reprints

The "back cover" of the "The 1st Million Megaton Explosion" on page four pays tribute to the finale of the film PLANET OF THE APES (1968). Third time Hate-Monger apparently dies. A fourth Hate-Monger next appears in THE SPECTACULAR SPIDER-MAN #13-14 (December 1977-January 1978). A fifth Hate-Monger turns up in SUPER-VILLAIN TEAM-UP #16-17 (May 1979-June 1980); as explained in these later stories, the 1st, 2nd & 5th Hate-Mongers all turn out to have had the actual brain-waves of the real Adolph Hitler. No explanation whatsoever for the Hate-Monger's space station NOT being blown out of the sky following the events of the previous issue; nor for Fury's need to use a NASA rocket to reach it, when he used a SHIELD aircraft in the previous episode (Or, for that matter, why, with an entire organization at his command, Fury keeps going on one-man suicide missions)

Frank Springer's last SHIELD episode; his next Marvel job is in CAPTAIN MARVEL #13 (May 1969).