Terry Brennan's Do It Yourself! / cover / 1 page (report information) 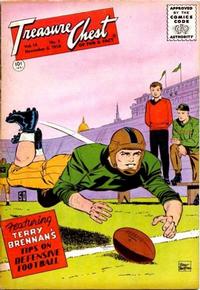 Inside Cover with issue publication information.

Terry Brennan's Do It Yourself! / comic story / 6 pages (report information)

This is not a story per se, it's an instruction booklet in comic book form. If you are not heavily into playing football, you will have difficulty understanding this. Not for beginners.

Genre
religious
Characters
Stephen I (King of Hungary 975?-1038)
Synopsis
The story of St. Stephen of Hungary, who died in 1038. He united the Magyars into one great nation and helped to bring Catholicism to Hungary.

First Line of Dialogue or Text
Here is our new home, our new life, Rosita!
Genre
drama
Characters
Aunt Eileen, Patsy Manners; Rosita Martinez; Jose Martinez
Synopsis
The Martinez family left Puerto Rico and came to the USA. Aunt Eileen suggests that Patsy invite Jose to a party to make him feel at home. On the day of the party, Jose shows up 30 mins. late and the group is upset with him for not letting them know if he was coming, or not. He tells them that in his country, they write "contesta" on invitations when an answer is required. They apologize to him and put on a Puerto Rican record and ask if he can dance. Jose is going to ask Aunt Eileen for advice before school starts next week.

Not a typical Patsy Manners story, which is usually instructions on how to make or do something. This is an actual story with characters continued from last issue.

Retelling of Homer's story of the Trojan Horse.

First Line of Dialogue or Text
Extry! Read how Steeltown was saved from the flood!
Genre
adventure; teen
Characters
Chuck White; Mike Kelly; Maria Donly; Captain Corning; Dutch
Synopsis
On the steps of city hall, the mayor thanks Capt. Corning for saving the town from flooding. He, in turn, acknowledges that he didn't save the town. The plan has existed for years and couldn't have been carried out without the help of the town citizens and agencies. In particular, he singles out Mike Kelly. Dutch thinks he and his workers saved the town. Mike tells him that Capt. Corning showed them where and how to build the dike. Dutch just followed Capt. Corning's instructions.
Chuck helps Mike to return to school while Maria looks for a Christmas Tree for her family.
Keywords
Christmas tree

First Line of Dialogue or Text
I don't care how it looks when I walk!
Genre
humor; anthropomorphic-funny animals

The Champ in the Circus! / comic story / 6 pages (report information)

First Line of Dialogue or Text
Blossom, no!
Genre
adventure; drama; humor
Characters
Frumson Wooters; Gunboat Slade; Blackie; Blossom; Hahti
Synopsis
Gunboat Slade has fallen into the elephant's water trough and is going to beat Blossom the elephant, when Hahti the elephant lifts Gunboat up with his trunk and squeezes the breath out of him. Frumson is the only one who can control Hahti and tells the animal to put him down on the ground. Frumson becomes the new elephant trainer and gets famous from his picture being in the papers. He gets plenty of free help and respect from local boys and girls. Frumson rehearses with Hahti and learns the routine from the elephant, which includes being flipped on a teeter-board, landing on his butt.

Tongue Trips Around the World (Table of Contents: 9)

Genre
non-fiction
Synopsis
How to say "I'll be seeing you" in nine languages.
Keywords
language

Pantomime gag-strip told in five panels.
On inside back cover.