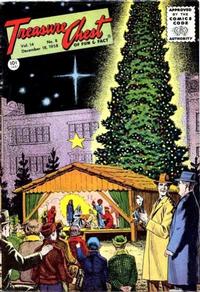 Synopsis
Three activities. Kitty certainly has been busy while Granny slept. Can you find which ball of wool goes with which sweater so that granny can get on with her knitting? Instructions on how to make a needle float on top of water. Cut out these four shapes and make them into a square.

First Line of Dialogue or Text
Well, Sister Theresa, everything's ready for this evening.
Genre
adventure
Characters
Chuck White; Sister Theresa; Father Carroll; Maria Donly
Synopsis
Last minute preparations are being made for the public Christmas Pageant. Fr.Carroll wants Maria to play the part of The Virgin Mary and goes to her home to ask her. Maria sees Chuck, but wants nothing to do with him and calls him a hateful man. After the pageant, Chuck meets with Fr.Carroll and Sr. Theresa at the Donly's house and presents them with a check for $1000 and a new Christmas tree to plant. Maria finds out that the state was going to build a highway where their old tree stood and it would have come down anyway. Chuck arranged for them to get the money from the sale of the tree.

Music of the People (Table of Contents: 3)

The Champ in the Circus! / comic story / 6 pages (report information)

First Line of Dialogue or Text
Best gate we've had in months, Karl!
Genre
adventure; humor
Characters
Frumson (The Champ) Wooters; Col. Hornbeam; Karl; Gunboat; Blackie Salter; Hahti
Synopsis
The opening performance of the elephant act has been a great success. Col. Hornbeam's bills will be paid off in no time. Gunboat and Blackie have stolen the gate receipts and have hidden it under straw and placed it in a tractor. Karl finds the money and straw and Gunboat knocks him unconscious. Frumson finds Karl on the ground with Gunboat and Blackie standing over him and money all around. They knock him out and tie a barbell around his neck, not knowing the weight is a fake. He's taken to the river and dumped in. Hahti watches and goes berserk and tries to follow to save Frumson.

What Can You Do? / comic story / 6 pages (report information)

Characters
Johnny; a mechanic
Synopsis
Johnny is a young boy who thinks he'd like to be an auto mechanic, but he wants to speak to a real mechanic to find out what it's like from someone in the field. The mechanic explains that you need to have a "feel" for mechanics and like to work with your hands and mind. He shows some of the tools a mechanic uses every day, used to perform a variety of jobs. In some shops, men specialize in just one job and become experts. He discusses apprenticeship programs and different work areas, like buses, farm equipment, airplanes and naval vessels. Several unions were mentioned, along with salary.

In 1958, most mechanics made between $2 to $3 per hour. A few really good workers made up to $10,000 per year. For more information, readers were asked to contact the National Automobile Dealers Assoc. in Washington, D.C.

First Line of Dialogue or Text
There's the reason our team will take the C.Y.O. meet!
Genre
drama
Characters
Joe Esterhazy; Steven Esterhazy
Synopsis
Joe Esterhazy is a champion diver and the other boys think they're a cinch to win the C.Y.O. meet, but Joe has no intentions of competing. The other boys tell him his school needs him, but he feels he has the right to do whatever he wants.

First Line of Dialogue or Text
Oh, Uncle Hannibal
Genre
humor; anthropomorphic-funny animals
Characters
Hannibal Bear
Synopsis
Hannibal is tied up in his own Christmas tree lights so substitutes himself for the tree.
Keywords
Christmas

inside back cover; pantomime gag-strip told in eight panels.

Feast of the Epiphany (Table of Contents: 9)