The Only Way to Kill Superman! (Table of Contents) 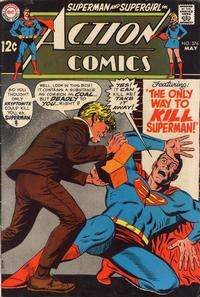 The Only Way to Kill Superman! (Table of Contents: 1)

The Hated Girl of Steel (Table of Contents: 6)

Job Number
W-137
Genre
superhero
Characters
Supergirl [also appears as Linda Danvers]; Marla Alexander; Tiras; Dr. Stanton
Synopsis
Scientists attending a conference at Stanhope College are kidnapped by aliens from the planet Rancor who want to steak their collective knowledge. Supergirl learns that they wee also responsible for the blinding of Dr. Alexander, and that they can cure the doctor.
Reprints

Story continued from the previous issue.

The Supergirl feature is next continued in Adventure Comics (DC, 1937 series) #381.