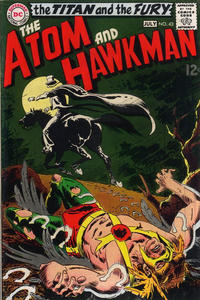 Come to My Hanging (Table of Contents: 2)

Genre
superhero
Characters
Hawkman [Katar Hol]; Hawkgirl [Shayera Hol]; Gentleman Ghost [Jim Craddock] (first Silver Age appearance)
Synopsis
In early 19th century England, the highwayman known as Gentleman Jim Craddock is executed for his crimes, but he vows to return and resume his criminal career. When an apparent ghostly bandit surfaces in Europe, the Hawks travel to London where they meet the Gentleman Ghost. However, while matching wits with him they disagree on whether he is truly a ghost, or a man pretending to be one.
Reprints
Keywords
Big Ben; hangings; highwaymen; London; Trafalgar Square

Story continues in the following issue.
Credits for script, pencils and inks confirmed from Julius Schwartz's editorial records, provided by DC Comics.
Page 6 is a 2/3-page and page 12 is a 1/2-page.

Job Number
S-161
First Line of Dialogue or Text
If an atom of oxygen were placed in the center of the continental United States...
Genre
non-fiction; math & science
Reprints

Will This Be Tomorrow's Headline? (Table of Contents: 9) (Expand) /